Joaquín Sorolla: The Luminosity of the Mediterranean 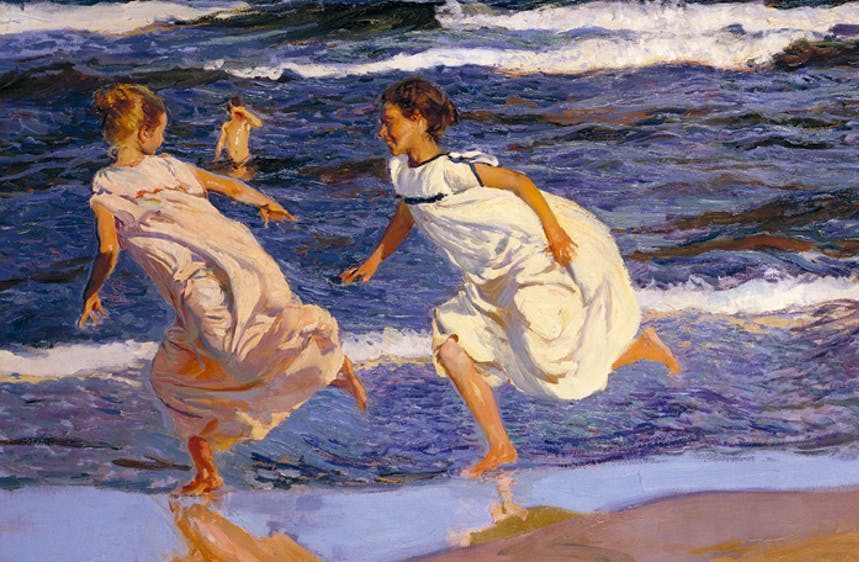 Joaquín Sorolla y Bastida (Valencia 1863 – Cercedilla 1923), also known as the Spanish painter of light, stood out for his beach and sea scenes inspired by the Valencian coast. Sorolla created canvases of a unique luminosity and he managed to transmit with his brushstrokes the Mediterranean atmosphere like no one else.

Although he is mostly known for his sunny beach paintings and relaxed seaside scenes, Joaquín Sorolla also painted genre scenes, especially in the first years of his career. In his early paintings, he painted the life of the working classes of Valencia, especially scenes of work related to fishing and the seafaring world, in which humble peasants and fishermen are the protagonists.

Towards the end of his career, Sorolla was commissioned by the Hispanic Society of New York to make a series of paintings of popular and picturesque customs of the different regions of Spain. In them, we can see again Sorolla as a genre painter.

Although, Joaquín Sorolla portrayed many places in Spain, his favorite place, without a doubt, was the Mediterranean coast. As many other painters, Sorolla had his preferred summer destination: the painter’s family used to spend their summer holidays in the region of Valencia, where the painter found his own paradise and place of inspiration.

Sorolla painted his most emblematic artworks inspired by scenes from the Valencian seaside. The luminosity of the Mediterranean allowed him to experiment with the sparkling reflection of the sun on the ships’ sails and capture the different shades of light and shadows on the bodies of the bathers and the sea.

But undoubtedly, Sorolla was par excellence the Spanish painter of light, being one of the representatives of Neo-Impressionism in Spain. Like other Impressionists, Sorolla worked in the open air, en plein air, trying to capture with his brushes the Mediterranean luminosity. His seaside scenes are reminiscent of the fascination of other Impressionists such as Claude Monet with the different shades and hues of light on water and of Édouard Manet’s sailboat scenes in Argenteuil.

Perhaps one of the clearest examples is this picture that Sorolla painted in 1909, Boys on the beach. The scene shows dynamism, innocence, and the purest and most exuberant childish joy. But in addition, Sorolla captures to perfection the undulating movements of the waves crashing against the beach, the flashes of light on the children’s skin that blurs in turquoise and mauve tones, tanning the skin. Also, the glints of the sun on the liquid surface of the water create shadows and reflections.

I think that after this article I urgently need to take a dip in the sea!

Previous articleNFTs: Vitalii Kotiash
Next articleCome on in, the water’s lovely

Japanese artist KAI have collaborated with