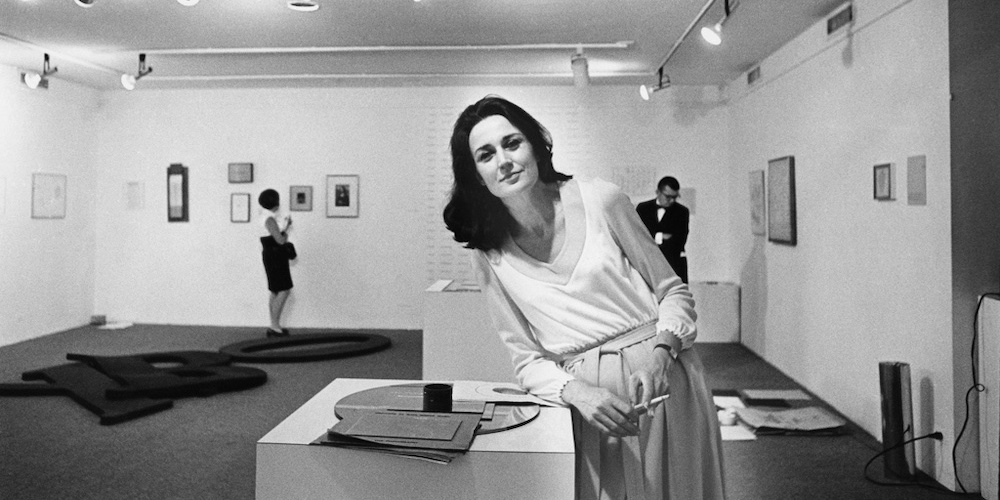 Philanthropist and gallerist Virginia Dwan, who was instrumental in bringing to prominence artists of the Minimalist, Conceptual, and Land art movements, died of cancer on September 4 at the age of ninety. Through her galleries in Los Angeles and then in New York in the late 1950s through the early 1970s, and by financing the efforts of now-renowned artists, Dwan played a crucial part in the careers of such towering figures as Walter De Maria, Michael Heizer, Yves Klein, Ad Reinhardt, and Robert Smithson. Possessed of a keen eye for the bleeding edge and willing to take risks, Dwan funded some of the most pathbreaking art of her day.

Virginia Dwan was born in Minneapolis in 1931, a partial heir to the industrial and consumer goods conglomerate 3M, through her father, John Dwan, a cofounder of the concern. She studied art at the University of California, Los Angeles, before dropping out and, in 1959—at a time when woman-operated galleries were few and far between—opening her first gallery. “I had wanted to have a gallery for some time, though I didn’t know anything about it, really. I just went ahead and did it anyway,” she told Artforum. “I do remember telling my husband that he shouldn’t go to parties or dinners with me, as people always assumed it was his gallery.”

The initial Dwan Gallery was in the Westwood section of Los Angeles, which was then distant from the city’s art scene, centered around the comparatively underfunded Ferus Gallery. Though the latter was quickly and enduringly canonized, while Dwan’s efforts would only come to be recognized in the past decade, both Dwan Gallery and Ferus represented envelope-pushing artists, with Dwan especially seeking out international talent. In the early years of her LA gallery—which would move to several locations around the city—she showed artists including Philip Guston, Matsumi Kanemitsu, Joan Mitchell, and Robert Rauschenberg, as well of the work of Reinhardt and Klein. Among the seminal shows she organized at the Los Angeles space were “My Country ’Tis of Thee” a 1962 show of Pop art that was one of several in the city at the time that cemented the new movement’s significance, and 1964’s “Boxes,” which featured works in the titular shape by LA sculptors Larry Bell, Tony Berlant, Ed Kienholz. Ron Miyashiro, and Ken Price.

In 1965, Dwan opened a second gallery in New York, and two years later shuttered her LA outpost to focus her efforts exclusively on its East Coast counterpart. Around this time, she also shifted her interest to Land artists, expanding her philanthropic efforts in support of their work, much of which was typically too large for any gallery to show. Among the major works she funded are Heizer’s 1969 Double Negative, two parallel hundred-foot-long tranches in the desert, for which she purchased the necessary land atop a remote Nevada mesa; and Smithson’s 1970 Spiral Jetty, which she financed through a $9,000 grant. She also showed the early work of Walter De Maria, including his 1968–69 Beds of Spikes, a set of steel panels laid flat on the ground with  pointed  rods protruding from them. “Because the works were very sharp, each one essentially a bed of nails, we drafted a release that visitors would sign as they entered that would absolve the gallery of responsibility if they were injured,” she said in her Artforum interview. Dwan later funded De Maria’s 1974 35 Pole Lightning Field, the precursor to his famed Lightning Field of 1977.

Burned out from attempting to meet the needs of the dozen artists who made up her roster—“I just ran out of energy,” she told Artforum_—_Dwan shuttered her New York gallery in 1971 and turned to making her own art, as well as to filmmaking. In 1996, she opened the Dwan Light Sanctuary in Montezuma, New Mexico, which employs prisms and rainbows to create a space of peace for visitors. In the decades following the closure of her gallery, she amassed a trove of important works, many of which she gave away to various institutions over the years. She bequeathed 250 major works to the National Gallery of Art in Washington, DC, in 2013, showing that she was generous not only to the artists she represented but to the public. “There’s the idea that things could sit in storage for many years to come, and not be out in the world where people can see them and be moved by them. It depresses me,” she said. “The idea is really that people should feel something from the collection. When the works are finally shown at the National Gallery, the opportunity will be there for the public to linger, to absorb.”