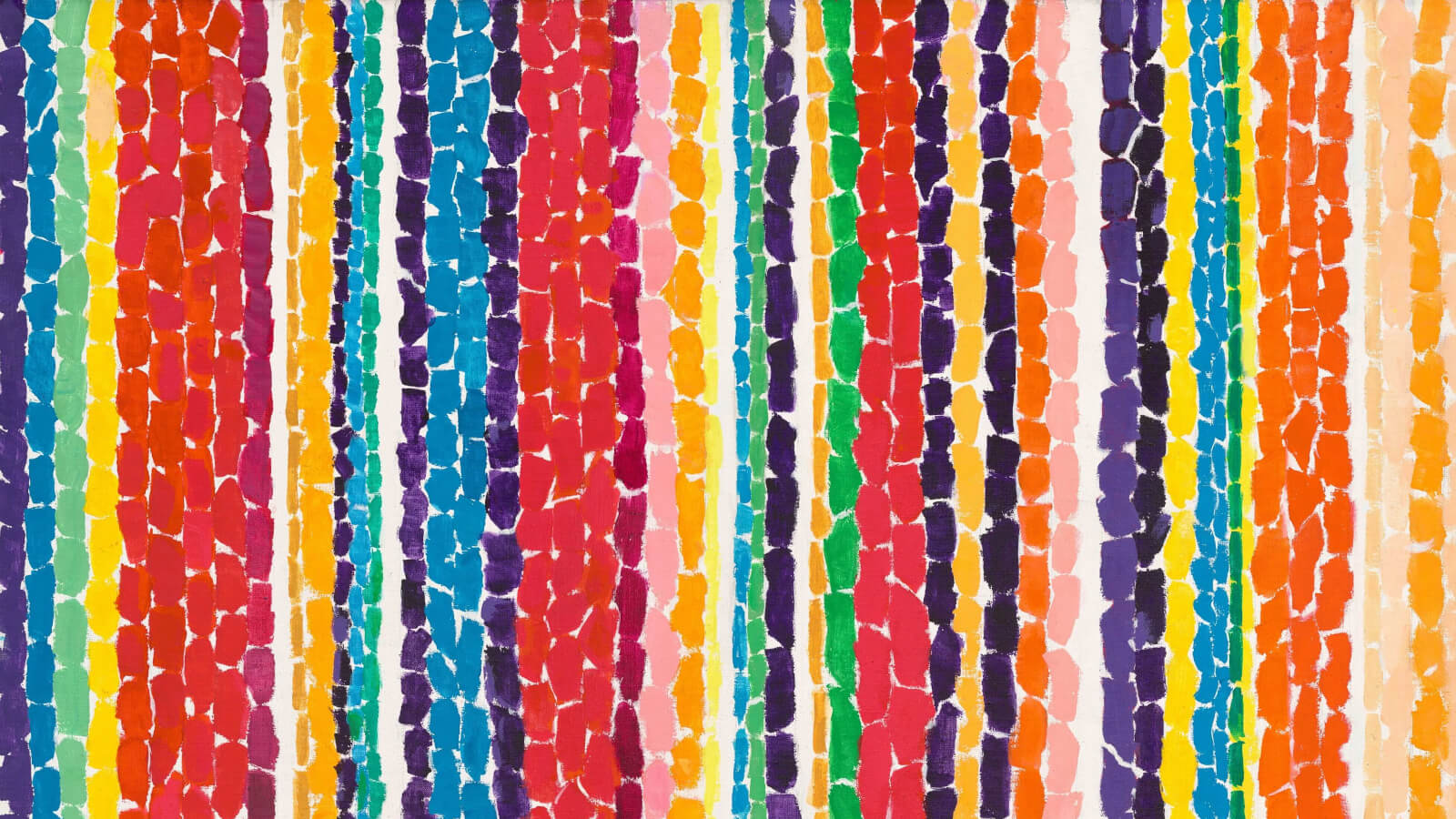 Alma Thomas was born in 1891 in the restrictive town of Columbus, Georgia. This was the segregated South prior to the Civil Rights Act of 1964. Thomas’s family moved in 1907 to Washington DC to escape the racial violence of Columbus and to seek more economic opportunities. In 1924, Thomas was the first graduate from Howard University to earn a Bachelor of Science in Art. Later the same year she began a 35 year career as an art teacher in a local school. After retiring in 1959, Thomas began to focus full-time on painting and developed her abstract signature style as seen in her masterpiece, Tiptoe Through the Tulips.

Tiptoe Through the Tulips was created in 1969 and measures 127 cm high by 121.92 cm wide or 50 inches high by 48 inches wide. Unlike the more traditional oil on canvas, the painting is acrylic on canvas. Acrylic is a synthetic paint that is less expensive, dries faster, and is more widely available. It is the modern artist’s paint medium.

The painting is abstract, therefore no recognizable subject may be perceived. However, Thomas was deeply inspired by nature when creating her compositions. As the painting’s name suggests, tulips were this piece’s inspiration. The tulip is a vibrant flower that can be found in almost any color. It has a long and complex history with the Netherlands famously known as the Tulipmania. However, Thomas was not referencing the flower’s Dutch past with her painting. She was referencing the beautiful rows of tulip farms famously seen on puzzle boxes and postcards. Their vibrant colors juxtaposed to each other in aligned rows add a geometric beauty.

Thomas had her debut exhibition in 1966 at Howard University at the grand age of 75. She was later the first Black female to have a solo exhibition at the Whitney Museum of American Art in 1971. Thomas died in 1978 but it was not until 2015 that one of her pieces, Resurrection, was bought and placed on public display in the White House. Thus making her the first Black female artist to be represented in the White House’s permanent collection on public display.

Alma Thomas broke boundaries for women, African Americans, and older artists. Sexism, racism, and ageism still exist, but she defied discrimination by her sex, her race, and her age. She was a mature Black woman. She was a mature artist. She was a trailblazer.

Previous articleCollective Wisdom | The Artists Who Won’t Go Away While I’m Trying to Sell – RedDotBlog
Next articleArtist Spotlight: Justin Wheatley