Giving form to the attachment and ambivalence of motherhood 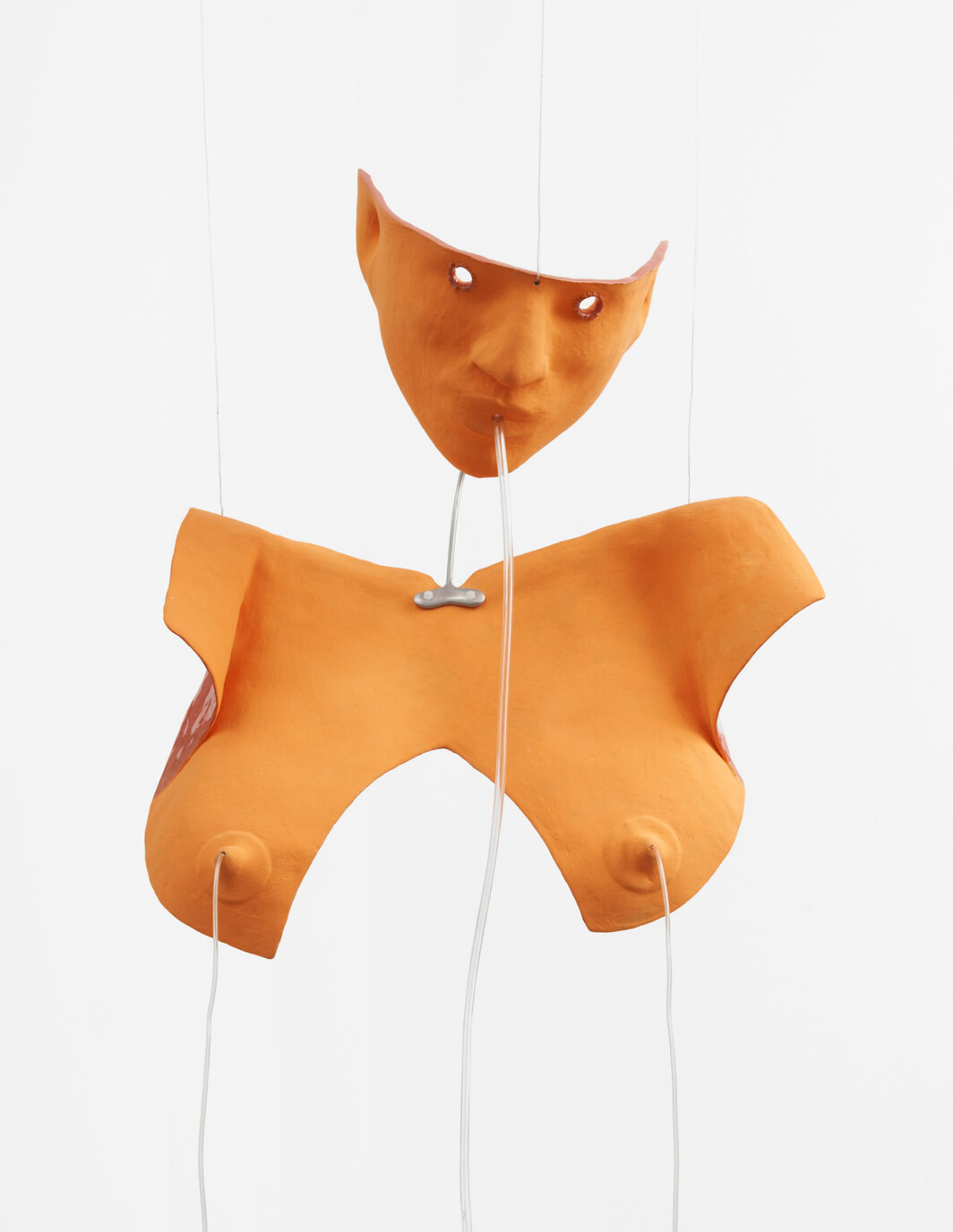 While Julia Phillips’s visual language remains informed by functional tools and ceramic body casts that serve as metaphors for social and psychological experiences, recent motherhood has complicated and expanded her visual and emotional arsenal. Her exhibition “ Me, Ourself & You” is on view now at Matthew Marks Gallery in New York through October 29. Below, the German-born, Chicago-based artist discusses her recent work in the context of the longer arc of her practice.

MY WORK OFTEN STARTS with a title that describes a relation, a role, a person, a function all at once. My first language is German, and my distance from the English vocabulary lets me think about titles in abstract and visual terms. I think about relationships and how they translate into mechanical and bodily metaphors. I’m particularly interested in relations that exist on an intimate, interpersonal level and translate to a structural and political one.

The focus in my work has shifted from mechanisms of oppressive relationships to relationships that allow for horizontal power dynamics, with a potential for reconciliation. In the last two years, I have taken a closer look at relationships with the self and what I call “imaginary organs,” like the soul or the spirit. I see that investigation as part of the development in the wish to become a mother.

During the months I tried to conceive, I had a sort of art crisis, a literal crisis of creation. The only creative expression I had was the “Conception Drawing” series (2021–22), driven by what I call my conception anxiety. The process was also influenced by past experiences, a whole spectrum from abortions to ectopic pregnancies to miscarriages. These medical experiences have made me more aware of my physical and imagined insides. What do you really know about the inside of your body? This endless inquiry is represented by the question mark after the title of each drawing. I went into the series wanting to articulate the separation between the pregnant person and the embryo or fetus. I was trying to draw borders, but also enclosures and passageways, curves that could be the inside of the body or negative space.

For this show I imagined taking a break from body casts because they’re physically taxing. But there was an urgency to make Nourisher, 2022. I was processing what it means to experience stress, inner turmoil, and sadness while breastfeeding. The sculpture consists of a face and a breast cast, with the face looking down toward the imagined infant, a moment I find so beautifully intimate between mother and child. The eyes of the face are pierced holes showing the residue of wet clay making way on the inside and outside of the eyes, a symbol of the gaze going both ways, from infant to mother and back. Medical tubes come out of the figure’s mouth and nipples and pool on the ground. It’s a metaphor for the sharing of resources, the intake of the nourisher becoming the infant’s nourishment, almost an environmental statement. What if the nourisher’s situation is unsafe? Is it that harm passed on?

I conceptualized this exhibition in a celebratory mood, awaiting child and motherhood. But my pregnancy also coincided not just with ongoing horrific global news, but with the overturning of Roe in this country. I realized that I wanted to account for this political climate and how it influences questions around longed-for, anticipated, dreaded, and unwanted motherhood. I had made works in the past that included titles, such as [R]Ejecter, 2018, and Aborter, 2017, that represent the uterus as a refusing entity, one that can miscarry or abort. With the two works in this show, Impregnator, 2022, and a new work titled Aborter, 2022, I try to highlight the complex dynamics of pregnancy by pointing at the two parties involved, the impregnating one and the conceiving, potentially aborting one. Handles appear on both devices as ambiguous elements representing who is in charge of such operations.

As more women become outspoken about their abortion experiences, complex and unique histories on various sides of such events are told. It’s been powerful to discover stories like Alice Walker’s The Abortion (1971). I just recently listened to an episode of the New York Times podcast, The Daily, titled “Pregnant at 16.” It was an eye-opening moment that led me to empathize with two women who had similar experiences yet turned into opponents: one pro-life and the other pro-choice. No matter how difficult it is, hearing women share their stories is politically important work and personally liberating.

My experience of pregnancies that did not result in the birth of a child has been an important subject of inquiry for me and has become part of my personal and artistic identity. Before there was a well-articulated wish for motherhood, there were—of course—also phases of ambivalence. Psychoanalysis has served as an important resource, but also a judgment-free field where feelings of repulsion and anxiety can be expressed and studied. One of my great influences is the work of Dr. Jennifer Stuart, particularly her text “Procreation, Creative Work, and Motherhood” (2011) and her articulations of attachment and autonomy.

The “Attachment” series (2022) explores this theory of mother-infant relationships in physical terms. I wanted to make devices with hand grips on both sides, informed by an infant’s instinct to grab. One side is a more rationally shaped handle, whereas the other is malleable and unbuilt, a reference to an infant’s presence. One piece has mechanical quick releases, found for instance in climbing gear. I was interested in the shape, but also the metaphor. Where does the need come from to quickly release what before has been attached?

The title of the show “Me, Ourself & You,” is a play on Joan Armatrading’s album Me Myself I. The sense of self and state of being alone is at stake with the development of becoming a mother and experiencing the body as a shared space, during pregnancy and after. I play with the word “ourself,” oscillating between singular and plural, pretty much what I felt when looking at a positive pregnancy test.

— As told to Michelle Millar Fisher

Previous articleMoving in Together? 12 Tips for Merging Your Art Collections – art journal
Next articleAsk a Gallery Owner | Should I Include Negative or Depressing Details of My Life in My Biography? – RedDotBlog