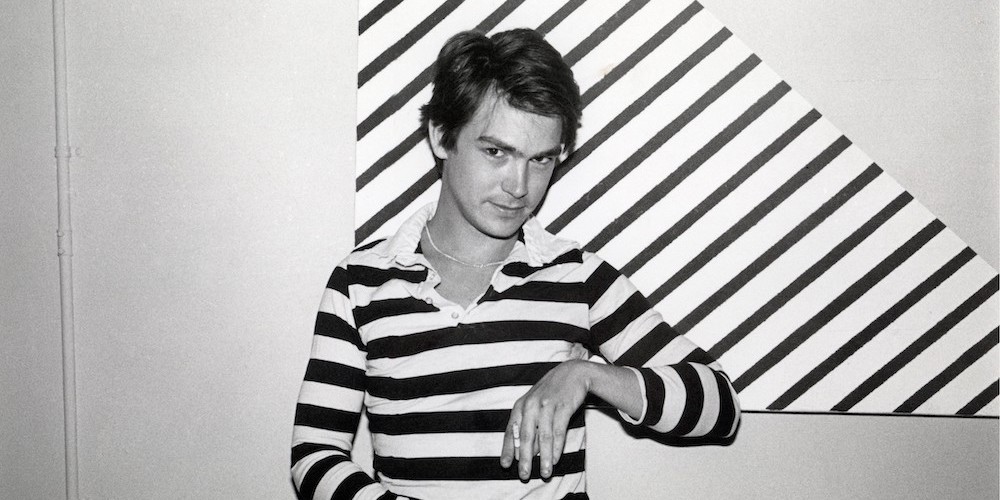 Painter, collagist, and underground film star Duncan Hannah, whose career took him from the sticky floor of CBGB’s to the walls of New York’s Metropolitan Museum of Art, died of a heart attack at his home in West Cornwall, Connecticut, on June 11 at the age of seventy while watching a French film. The news was confirmed by filmmaker Amos Poe, a longtime friend. Hannah—whose piquant chronicle of the Downtown New York scene of the 1970s, fathomed from the pages of his Pernod-soaked journals of the era, was enthusiastically received by audiences and critics alike—was known for his figurative work evoking the 1930s and ’40s, and for his exquisite good looks and taste. Described by Glenn O’Brien in the pages of a 1984 issue of Artforum as “the Henry Mancini of the New Wave, or the power-pop Balthus,” Hannah continued to the end of his life to confound critics who couldn’t decide whether he was, as O’Brien presciently put it, “retro- or post-something.”

Born in Minneapolis in 1952, Hannah was raised in a conservative household which he yearned to escape. Initially drawn to Abstract Expressionism, he attended Bard College in Annandale-on-Hudson, New York, in the early 1970s, before moving to New York City in 1973, where he finished his degree at the Parsons School of Design in 1975. By then, he was already rubbing shoulders with the likes of Patti Smith, David Bowie, Bryan Ferry, Richard Hell, and Lou Reed, the last of whom once offered to let Hannah, who at the time resembled shaggy-haired teen heartthrob David Cassidy, shit in his mouth (the young painter politely declined). During this time, he dabbled in film work, notably appearing alongside Debbie Harry in Poe’s 1976 Unmade Beds and the director’s 1978 The Foreigner. Hannah spent most of the 1970s either blind drunk or searingly hungover, as he revealed in his 2018 memoir Twentieth-Century Boy: Notebooks of the Seventies, in which he detailed what Howard Hampton, writing in Bookforum, described as “riveting cautionary tales, demonstrating the necessity of raw experimentation as a source of discovery and creativity, uneasily coupled with the steeply diminishing returns of losing control as a way of life—or art.” Despite the book’s many vastly entertaining anecdotes—of a tired-looking Bowie and a washed-up Marc Bolan surreptitiously checking out the New York club scene; of being offered a blow job by Nancy Spungen in the elevator of the Chelsea Hotel; of getting loaded with Salvador Dalí—“a lot of it was kind of painful,” Hannah told M. H. Miller for The Paris Review. “It was cliquey. It’s not as though everybody liked each other. There were a lot of bad vibes. A night at CBGB’s—not all the bands were good, and not all the people were nice, and you wake up with a terrible hangover and couldn’t really remember what happened. It was just kind of chaos in a way.”

In 1980, Hannah got sober and began to focus in earnest on his art, which by this time was figurative, typically rendered in oil on canvas and recalling in its stark, elegant style the work of Edward Hopper or Winslow Homer. His preferred subjects were sleepy-eyed European film starlets and idealized vignettes of sexy locales such as the streets of Paris, the race course of the Monaco Grand Prix, or the snowcapped Alps. No matter how idyllic the scene, pop culture was never far away: A later series comprised faithful renditions of vintage book jackets. Though these works might seem in contrast to the seedy confines of CBGB’s and Max’s Kansas City, where he cut his teeth, Hannah found the glamour in all of it, whether high-toned or tawdry.

Hannah enjoyed more than seventy solo shows over a career spanning five decades, and was named a Guggenheim Fellow in 2011. His work is held in the collections of the Chicago Art Institute, the Minneapolis Art Institute, and the Metropolitan Museum of Art, New York, among other institutions.

“Sometimes I was surprised at how little I’ve changed,” Hannah told Miller in 2018. “Other times, I would shake my head and think, God, what an asshole. But I was surprised how well it all worked out, in a kind of shambling way. You can have a plan, but then your plan doesn’t work, and then something else happens. But just kind of inadvertently, the plan worked.”