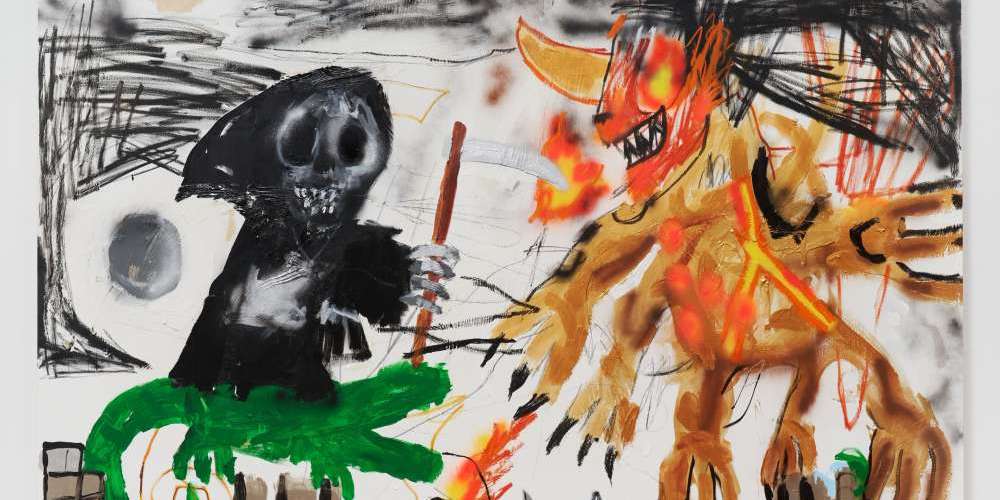 Robert Nava’s large-scale figurative paintings offer sprawling odes to the fantasies of a certain class of preteen Dungeons & Dragons enthusiast. Mythical beasts, angels, and demons are rendered in thick, bright brushstrokes and frantic scratches of grease pencil. Nava’s works often have nostalgic titles like Aware Wolf Deity, 2022, quoting the dad-joke-level pun of a recent meme, or Artax Gate (Before) and (After), 2022, a nod to the 1984 film The NeverEnding Story. If Jason Rhoades probed the inner machinations of postindustrial American masculinity, Nava has mined the consciousness of the man-child Redditor. But where Rhoades found desublimated debauchery, Nava has created a cast of mostly harmless mythological creatures.

In Fire Keeper VS Death, 2021, a black-hooded grim reaper riding atop an alligator battles against a multilimbed devil. The pocket-size image on the checklist suggests a third-grader’s drawing, but Nava’s practiced control of his medium belies his juvenile subject matter. Thick globules of white acrylic paint add depth and texture to the ghoul’s scythe and body, contrasting with the diffusive MS Paint­–inflected use of spray paint. While Nava’s critics have latched onto the puerile elements of his practice to declare his works little more than gimmicks, the artist’s steadfast dedication to producing paintings that suffer when digitized subverts any perceived marketability.

Nava’s approach is reminiscent of iconoclastic American painters like William Copley, William Wegman, and Joan Brown, whose work in the late 1970s undermined traditional notions of taste and skill. Canonized in a 1978 New Museum exhibition curated by Marcia Tucker, this generation of “bad” painting stood apart from previous deskilling movements in its self-reflexive use of irony. Similarly, Nava’s paintings offer a tongue-in-cheek reaction to classicizing forces, a celebration of unbridled childlike imagination underpinned by an awareness of the artist’s own tenacity.