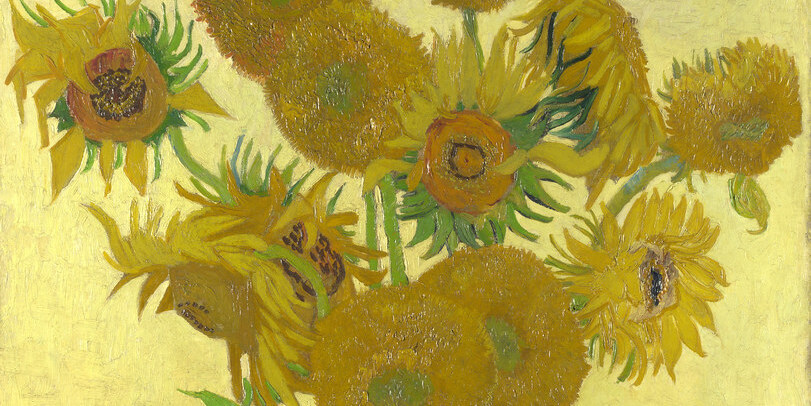 Phoebe Plummer and Anna Holland, two young protesters affiliated with climate-change action group Just Stop Oil, raised the awareness of many and the blood pressure of some earlier today when they sloshed tomato soup across the front of Vincent van Gogh’s iconic Sunflowers at London’s National Gallery. Immediately thereafter, the pair, clad in shirts bearing the name of their organization, glued themselves to the wall immediately beneath the painting and addressed the stunned gallerygoers surrounding them.

“What is worth more, art or life?”  cried Plummer. “Is it worth more than food? More than justice? Are you more concerned about the protection of a painting or the protection of our planet and people? The cost of living crisis is part of the cost of oil crisis, fuel is unaffordable to millions of cold, hungry families. They can’t even afford to heat a tin of soup.”

Officials rushed to clear the gallery and the duo were summarily unglued and arrested. The work, one of six remaining images of sunflowers that van Gogh painted in 1888 and 1889, was discovered to have been unharmed, save for slight damage to the frame, as the canvas was covered with glass. The protesters acknowledged that they had been aware of this when they chose their target, not wishing to harm the painting but to draw attention to the effects of climate change.

The action sparked strong and divided emotions, with many complaining that the activists had misguidedly targeted a beloved work that had nothing to do with climate changes, and still others noting that the effort had neatly achieved its intended effect. Just Stop Oil stood behind the protesters and their action, and promised more such efforts to achieve their goal of ensuring the British government halts new fossil fuel licensing and production.

“We are not trying to make friends here,” spokesperson Alex De Koning told The Guardian shortly after the incident. “We are trying to make change, and unfortunately this is the way that change happens.”