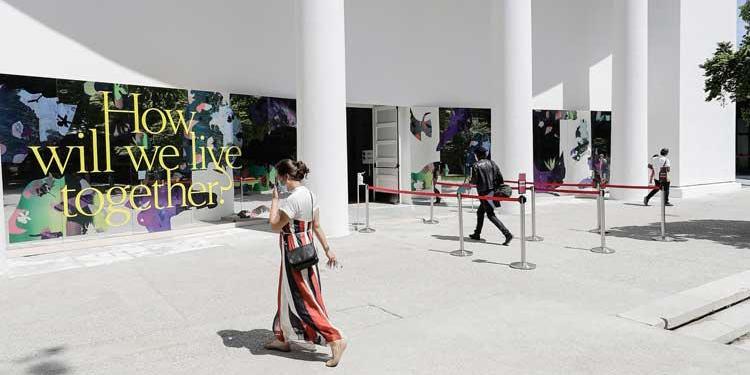 The organizers of the Fifty-Ninth Venice Biennale, set to open April 23, have announced that they are taking steps to guarantee that Ukrainian artist Pavlo Makov and his team are able to make the trip to Italy and that the Ukrainian pavilion will go ahead as planned, despite the Russian invasion of Ukraine. Makov and the pavilion’s curators—Lizaveta German, Maira Lanko, and Borys Filonenko—had in late February acknowledged that they were “not able to continue working on the project of the pavilion due to the danger to our lives.” With flights out of Ukraine grounded, the group could not ship the elements necessary to stage the re-creation of a wall-mounted 1995 work by Makov in which water cascades through a series of bronze funnels.

Biennale officials stated that they were “collaborating and will collaborate in every way” with the Ukraine team to make the pavilion happen, though they did not issue details regarding the effort. The assurance arrives as Kharkiv, where Makov resides, is being hit by Russian cluster bombs and as Kyiv, where the three curators live, remains the target of a forty-mile-long Russian convoy likely aiming to encircle the city.

“La Biennale di Venezia intends thereby to manifest its full support to the Ukrainian people and to its artists, and express its firm condemnation of the unacceptable military aggression by Russia,” wrote the Biennale organizers. To that end, they say, they have barred “official delegations, institutions or persons tied in any capacity to the Russian government.”

Raimundas Malašauskas, Alexandra Sukhareva, and Kirill Savchenkov, respectively the curator and two artists attached to the Russian pavilion, last week resigned in protest of Russian president Vladimir Putin’s attack on Ukraine, putting not only their careers but in some measure their lives on the line.