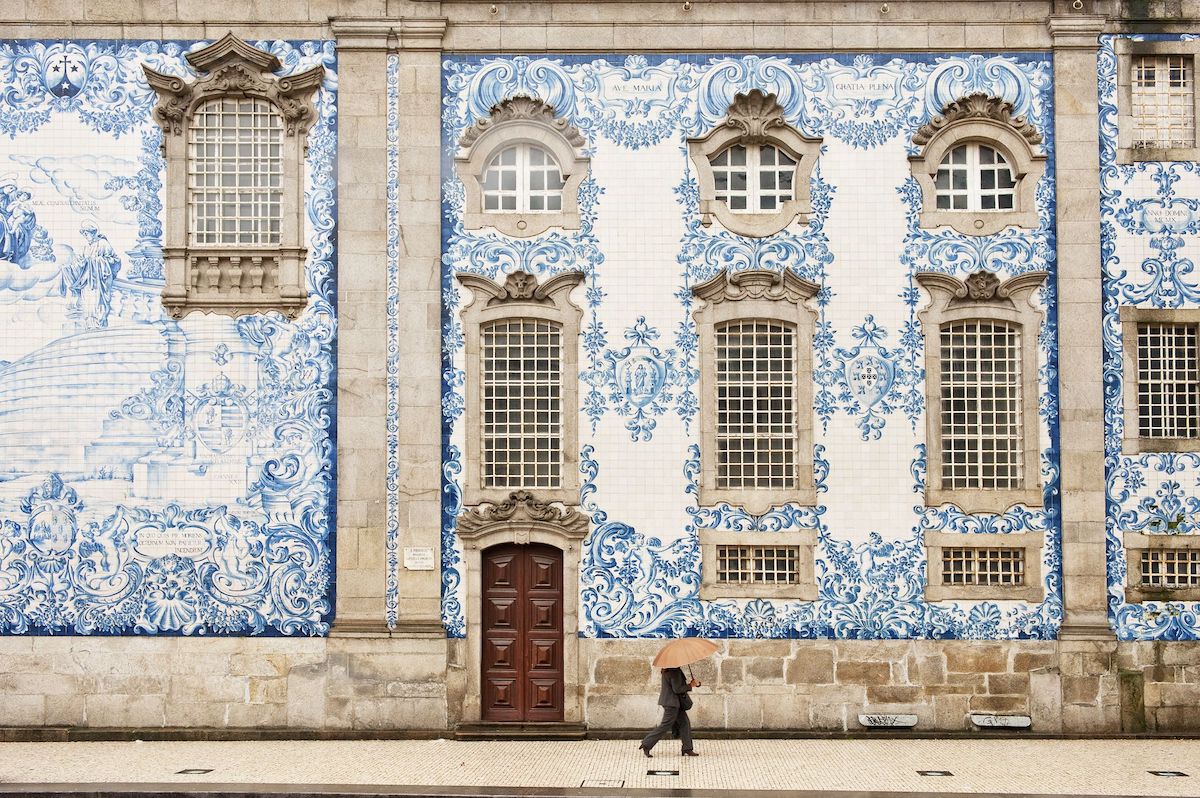 Azulejos are hand-painted, tin-glazed ceramic tiles that decorate interiors and exteriors throughout Portugal. The word ”azulejo” derives from the Arabic word “az-zulayj”, meaning small, polished stone. The original function of azulejos wasn’t ornamental; it was intended to protect the walls of homes and keep temperatures pleasant indoors. Azulejos originated in the Near East and arrived in Western Europe with the Moors around the 13th century.

When King Manuel I of Portugal visited Seville, Spain, in the 15th century, he was charmed by the colorful tiles and brought this craft back to his country, decorating his home at the Sintra Palace. Azulejos were imported from Spain until the mid-16th century when the tiles began to be produced in Portugal. These gorgeous tiles were first used to decorate walls of religious sites and palaces in Portugal in the 17th century. It was also during this period that Portuguese azulejos were exported throughout the world.

Portuguese Azulejos Over the Centuries

Portuguese azulejos were largely influenced by Islamic art. The simple, geometric shapes, checkered patterns, and bright colors were popular during the 16th century. Soon to follow were religious symbols and allegories along with the depiction of saints. Popular colors used during this period included greens, yellows, and Manganese purple. An early example of the most extravagant azulejos can be seen at the Fronteira Palace in Lisbon. The entirety of the palace is covered floor to ceiling with azulejos.

During this period, floral and biblical motifs were most common. This is also when the iconic blue and white azulejos erupted across Portugal. This style was highly influenced by the Dutch Delftware that were all around Europe at the time. Two magnificent examples of this style of azulejos can be seen at São Vicente de Fora Monastery in Lisbon and the Catholic church, Igreja do Carmo, in Porto. The Church and aristocrats commissioned the majority of azulejos throughout this period.

This era became known as the “Ciclo dos Mestros” or Cycle of Masters. Complex compositions rendered by expert artisans were created. Two great masters of Portuguese azulejos during this time were Antonio de Oliveria Bernardes (1660-1732) and Manuel dos Santos (active 1702-1730). They introduced the trompe l’oeil technique and defied problems of scale and perspective. Their subject matter was often figurative, with religious themes depicted in a theatrical manner with great detail.

The expansion of Portuguese cities increased azulejo production and new features were introduced such as relief shapes. This style appeared in Portugal’s big cities of Lisbon, Porto, and Aveiro. Floral motifs, vines, and insects were the most popular subjects. However, once azulejos became available to the upper-middle class, the wealthy lost interest in this art form and it slowly started to diminish. Traces of Art Nouveau azulejos can be seen today in Lisbon’s Campo de Ourique district.

During the 1950s, renowned Portuguese artist Maria Keil created azulejos for 19 metro stations around Lisbon. Her exceptional designs transformed the cityscape to dazzle generations of commuters with a colorful and creative atmosphere. Keil’s azulejo artworks create a unique experience for the public and demonstrate how azulejos transform the energy of an environment.

There are still many azulejos factories around Portugal today. You can tour them and watch skilled artisans craft these exquisite tiles using traditional techniques. Two of the most popular azulejo factories in Lisbon are Viúva Lamego and Fabrica Sant’ Anna, which is also the oldest tile factory in Portugal. Venture outside of Lisbon to visit Portugal’s ceramics capital, Caladas de Rainha, also home of the famed Fábrica de Faianças and the Museu da Cerâmica.

Where to See Portuguese Azulejos

Azulejos can be found everywhere throughout Portugal. They decorate every kind of public and private space from metro stations to restaurants and bars to home interiors and sculptures. One of the best places to see and learn about the history of Portuguese azulejos is Museu Nacional Do Azulejos (The National Tile Museum) in Lisbon. A visit to the Sintra National Palace offers the unique experience of how azulejos resonate within a royal space. There’s also Museu Arte Nova (Museum of Art Nouveau) in Aveiro just outside of Lisbon. Aside from museums, there are several large scale street murals made from thousands of azulejos. These public art projects can be seen everywhere from building facades to underground metro stations.

Contemporary Portuguese azulejos are incredibly diverse. Many artists in Portugal use all the traditional elements of azulejos from patterns and figures to iconography and imagination in their work. Contemporary Portuguese artist Diogo Machado a.k.a ADD FUEL takes azulejos design far beyond ceramic tile work to include fine art prints, apparel, jewelry, toys, and more. Another Portuguese artist, Joana Vasconcelos, created a gigantic rooster sculpture covered with hundreds of azulejos.

Azulejos have impacted Portuguese culture and continue to inspire generations of artists in Portugal and beyond.

Previous articleGustav Klimt’s “Portrait of Adele Bloch-Bauer – The Woman in Gold”: The painting at the center of a Nazi controversy – RedDotBlog
Next article10 surprisingly affordable high-flex works