Family support was key to painter Wiley Johnson’s journey as an artist. His mother Joy speaks about overcoming major difficulties and how he found creative fulfillment. 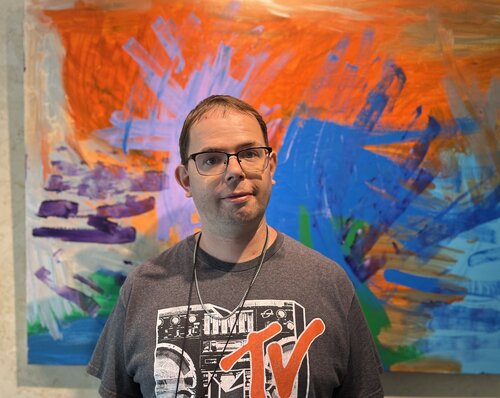 Artist Wiley Johnson with his painting.

AS:  What is Wiley’s background?

JJ:  Wiley has autism spectrum disorder. School was always difficult for him. He became depressed after finishing high school when he was not able to find a job. He was subsequently hospitalized in a psychiatric hospital. I was horrified to visit and find him overmedicated and to learn that he had been put into physical restraints. I had him transferred to another hospital, but he went on to a series of hospitalizations and group homes that made him angry and withdrawn. He had no purpose in life. I eventually became disabled and had to quit my job as a physician, but this gave me a chance to try to make a place for Wiley.

Wiley is fortunate to have staff 3-4 hours/day, 5-6 days/week paid under a Medicaid program called the Innovations Waiver for people with intellectual and developmental disabilities. I was able to recruit staff to work with him rather than depend on an agency for staffing. Wiley asked me, “Why can’t you hire an artist to work with me?” At first I wondered how that would be possible, but eventually, I realized that it was worth trying. We hired our first artist in 2020 and started Wiley’s website and Instagram and Facebook accounts. We could have never progressed Wiley’s art career so quickly without the support of artists with social media and website skills to assist us.

AS:  When did Wiley begin to express himself through art?

JJ:  Wiley started painting around 2009. I bought a townhouse for him at that time. He had painted a little in hospital art therapy classes years earlier, and it gave him something to do when he was alone, but I just thought of it as a hobby. Wiley’s first invitation to exhibit came from the Brushes with Life program at North Carolina Memorial Hospital in Chapel Hill, NC. I saw how he came alive when people commented that they liked his art. A friend suggested that Wiley could develop a business with his art, but that seemed far-fetched. Still, he was producing, so I looked for events where he might sell his art. 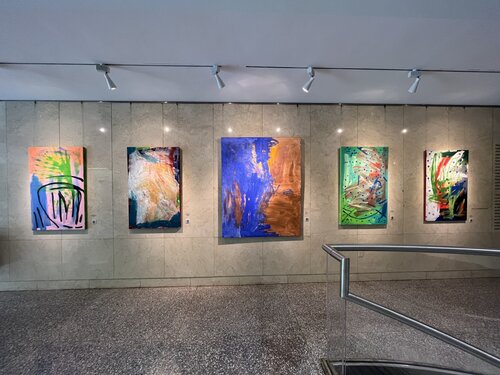 Wiley Johnson’s art has been displayed in several exhibitions.

AS:  What was Wiley’s first “break” as an artist?

JJ:  A challenge for me was finding opportunities for Wiley to display his art. Then I found out about an organization for people with disabilities which would have 1-2 art sales events per year. A few family members bought his art. I saw how happy he was to sell a small painting for a modest sum.

I connected with local organization Arts Access, and later volunteered to participate in a video to raise money for them. A few years later, their staff recommended that I attend a workshop through Triangle Artworks. They listed monthly art calls! We joined Visual Art Exchange in Raleigh, which gave Wiley opportunities to exhibit. By 2019 we went to look at other venues they curated. Wiley would have to paint larger canvases to be considered.

We joined ArtSpace in 2019 and got cards and prints into their gift shop. This led to opportunities with other local businesses and a restaurant that exhibited his artwork. Arts Access offered a solo exhibit at the Raleigh Woman’s Club January, 2020. The pandemic slowed things down, but fortunately Wiley’s paintings were accepted into four juried group shows in 2020 outside of Raleigh as well as one in town.

Wiley got a big break in 2020 from one of our first Facebook posts, when a customer bought two paintings for $1,000. I imagined if one person would spend this much money, there must be other people in the world who would also appreciate and value his art. ArtLifting (a site that champions artists with disabilities) accepted Wiley as their first North Carolina artist in 2020. Then Chase bank in Durham, NC bought a license in 2021 through ArtLifting to install two large reproductions of Wiley’s Art. We formed an LLC on the advice of my attorney when we learned of that upcoming sale.

I never dreamed Wiley’s art would be displayed in so many galleries and exhibitions when he first started painting. ~ Joy Johnson

AS:  What press coverage has he gotten?

JJ:  A lot has happened in the past several years. Arts Access was instrumental in getting Wiley initial coverage in a Walter magazine article about disabilities and the arts. They interviewed the director, who referred them to me and to Wiley. Then Arts Access bought a painting and featured Wiley as their artist of the year. Spectrum News conducted an interview that was aired several times on local television.

Afterwards, multiple local magazines covered the opening of the Charlotte Russell Contemporary Galley, which features under-represented artists, including Wiley. Regency Center ran a special in their trade online newsletter after they purchased a license to install a replica of one of Wiley’s paintings in Raleigh.

I hired a copy editor to support Wiley’s microenterprise in art, and she takes care of his social media. She was so impressed with the Charlotte Russell Gallery feature and an exhibit at Sertoma that she convinced her boss at North State Journal to let her write an article about Wiley’s Art.

AS:  Given your experience, what would you recommend for other artists with disabilities who want to share their art?

JJ:  Wiley now has a vocation and purpose in life. It was made possible by family and community support of his desire to paint and exhibit, as well as providing a very modest income.

My recommendations to others are:

The above steps can help you develop an exhibition history. I wouldn’t get hung up on sales initially if painting makes you happy.

Want to stay current on cutting edge business articles from Artsy Shark, plus artist features, and an invitation to the next Call for Artists? Click below to sign up for our twice-monthly email. You’ll get all this plus opportunities and special offers that you can’t get anywhere else!