“Spinning East Asia Series I: A Compass in Hand” at CHAT (Centre for Heritage, Arts and Textile) 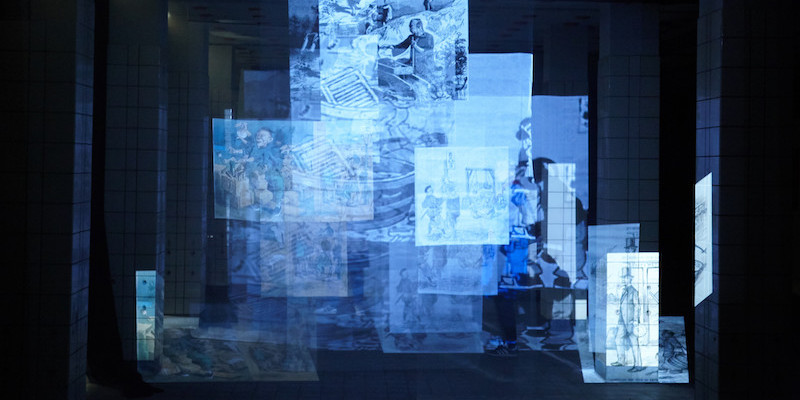 Showcasing fifteen individuals and collectives working within an expanded notion of textiles, “Spinning East Asia Series I: A Compass in Hand” explores the titular region as a sociopolitical, geographic, and cultural construct.

Locally, Lau Chi Chung’s installation The Dayspring of Eternity, 2021, gathers mementos from Hong Kong’s North Point neighborhood: A hand-embroidered panorama of Shanghai’s Bund evokes the settlers of the 1940s and ’50s who brought with them cosmopolitan mores, while photographs of the derelict State Theater Building, built by George W. Grey and Lun So-Fo in 1952 and closed in 1997, meditate on the future of a century-old film industry that is now contending with a global pandemic and tighter scrutiny under the National Security Law.

More broadly, Alice Wong and Aryan Javaherian’s video US & THEM, 2019, investigates the role of media representation in the perpetuation of Asian stereotypes in North America from the nineteenth century to the present. Projected on layers of gauze, the snippets of images make visible the white mainstream demonization of Asian immigrants—initially through mass media portrayals of them as heathens, rapists, and madmen, and subsequently through the model minority myth—and the impact of its internalization.

The scopic regime through which East-West relations are negotiated is also staged in Spatial Anatomy’s Myeon-bang, 2021, a reproduction of a textile factory floor in the Democratic People’s Republic of Korea frequently visited by foreign tourists who observe workers perform a well-rehearsed choreography of labor. Meanwhile, in a mashup of techno, gaming culture, and Hindu and Buddhist symbology, Lu Yang’s hypnotic five-channel video installation Electromagnetic Brainology, 2017, forms an absurdist shrine to China’s breakneck technological transformation.

CHAT is currently closed due to Covid-19.

I have tried to assert the dignity and eternal

I have tried to assert the dignity and eternal