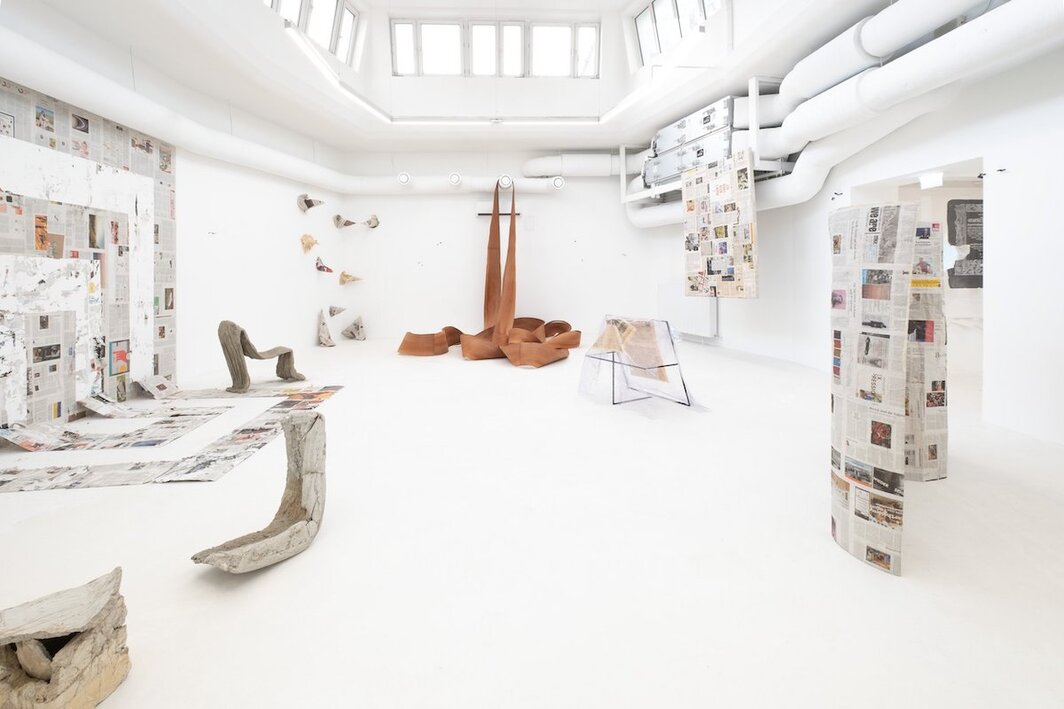 A passageway lined with torn newsprint leads into an odd capsule of an exhibition space. In it, a huge ribbon of tropical mahogany tumbles down a wall; low freestanding sculptures in concrete represent crude seating. Pages from newspapers in Polish, German, French, Czech, and English are collaged on a paravent, a suspended frame, and directly on a wall and floor. Thick pipes and fluorescent lights trace the gleaming white room’s upper perimeter, evoking the eerie sterility of a ’60s sci-fi film.

In this uncanny scenario, Polish artist Renata Rara Kaminska explores freedom of speech and the press—and in this context, the exhibition itself is a risk: Since the far-right Law and Justice party (PiS) won control of Poland’s government in 2015, multiple Polish art institutions have experienced “interventions” in the form of dismissed museum directors; in journalism and art, censorship and self-censorship are ongoing.

Showing in a German-owned building, the Berlin-based artist daringly invites viewers to consider not only who can express what (the dramatic wood sculptures, made from archived imported material, allude to Germany’s current, overdue colonial discourses) but also news as a generator of memory: In the collages, recent headlines and stories become a kaleidoscope of European Union rupture. The artist also looks further back: For 1609, 2022, she ripped enlarged copies of a page from the very first newspaper to offer glimpses through the passageway windows they conceal. In November 1953, 2022, an intact 1953 edition of the GDR’s socialist organ Neues Deutschland hangs on a metal frame Kaminska pilfered from East Germany’s former parliament building before it was demolished. Its stories deliver spin on spies, postwar production, and American tanks. Rather than elegize the freedoms long associated with the fourth estate, Kaminska exposes published information as the malleable medium that it has always been, and encourages contemplation on the world’s increasingly fragile structures of truth-making.