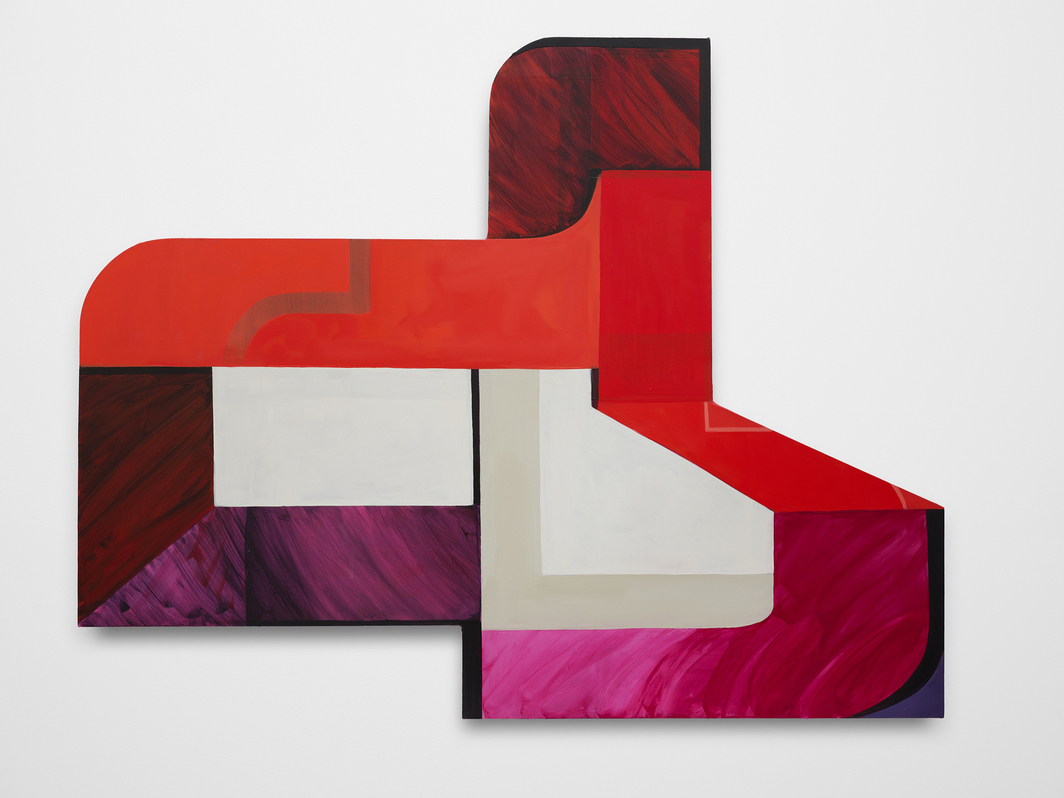 Certain kinds of geometric abstraction yield to the lure of the shaped canvas. Rebekah Goldstein, the San Francisco–based painter known for her exquisite formalism, has now joined the ranks of artists such as Elizabeth Murray, Harvey Quaytman, and Frank Stella in her abandonment of rectangular constraint. Goldstein’s magnificent show here—filled with boldly colored shaped paintings whose elegantly convoluted forms dialogue with a selection of linear and quietly voluptuous sculptures—makes no bones about claiming space.

Although her paintings are not three-dimensional, they were inspired by the three-dimensionality of the body during the physical changes of pregnancy. Channeling the contortions required by an expectant mother to fit in—be it to a seat on the bus or some proscribed notion of what an artist should be—Goldstein’s paintings push against rectilinearity, even as their blueprint-like linework underscores their creator’s architectural imagination.

Simultaneously curvy and awkward, angular and sensual, these full-figured canvases speak a language of painterly androgyny, while their titles, such as Chasing My Tail, 2022; Cry into My Cocktail, 2021; and Crawling Back to You, 2021, parody the abjection of despair and desire. Yet it is hardly only their carnal geometries that matter. Goldstein’s palette of hot pinks, maroons, coppers, and flesh and wood tones—combined with steely grays and greens that alternate between being sickly and lush—is dynamized by semi-sheer brushwork that cascades over her matte fields like voile on skin. By activating the push/pull of shapes both abstract and corporeal, her interlocking forms evoke the complex transformations that ensue when we recognize the other as both an extension of the self and a challenge to its limitations. In Goldstein’s work, this effect is equally true of the relation between mother and child, and between painting and sculpture.