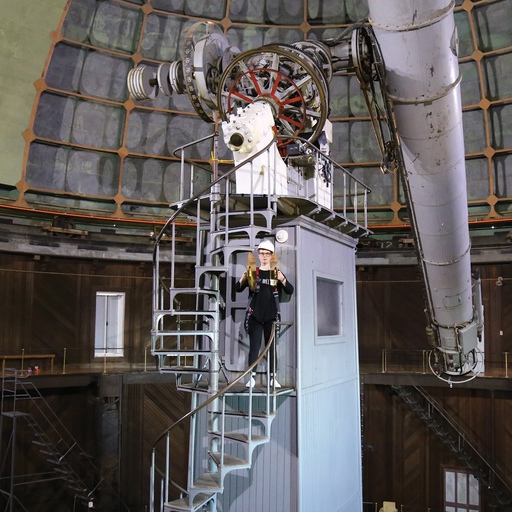 Sara Morawetz is an interdisciplinary artist who uses methods commonplace within scientific research to inform her practice. In short her work aims to deconstruct the underlying processes of methodological labor—to explore the exhaustive, the obsessive, the poetic and the absurd inherent within scientific activity.

The particular approaches she has utilized include observation, experimentation, and standardization, processes typically categorized under the umbrella term the Scientific Method. Morawetz’s projects are often collaborative or carried out in partnership with institutions, including the Massachusetts Institute of Technology (MIT), the National Aeronautics and Space Administration (NASA), and the National Institute of Standards and Technology (NIST).

In 2018, Morawetz initiated étalon, a performance of physical endurance in which she walked 2,100 kilometers (roughly 1,300 miles) from Dunkirk, France, to Barcelona, Spain. The trek took her 112 days, from June 24 to October 13. The title of the work was inspired by the orders given by the French Academy of Sciences in 1792 to the French astronomers Jean Baptiste Joseph Delambre and Pierre Méchain to determine a new universal standard unit of measurement: the mètre étalon (one meter). Morawetz’s route was inspired by the pair’s journey, during which they had traveled the length of the meridian arc in order to measure the curvature of the Earth. In a riposte to the way that scientific history has been dominated by discoveries made by men, Morawetz invited a roster of women artists and writers to accompany her for various stages of the walk. Through the use of specialist computer software, Morawetz and her visiting walkers were able to take measurements using GPS receivers and a laser range finder in order to calculate the radius of the Earth, producing both a daily provisional meter length and a rolling cumulative total.

In 2015, from July 15 to August 21, Morawetz lived, worked, and slept at Open Source Gallery in Brooklyn, New York. This durational performance, titled How the Stars Stand, was inspired by the length of a day on Mars, which is 2.7 percent longer than a day on Earth, running at 24 hours, 39 minutes, and 35 seconds. Morawetz used NASA’s Mars24 Sunclock, in consultation with Dr. Michael Allison from the NASA Goddard Institute for Space Studies, calibrating her daily schedule to observe local mean solar time on Mars rather than on Earth. The thirty-seven days of the performance reflect the length of time it takes to adjust to Martian time, observe that temporality for a sustained full cycle, and then slowly synchronize with the Earth again. As with étalon, the performance was continuously live streamed and documented on a website set up for the project, thereby making it accessible to individuals across the globe.

How would you describe what you do? I tend to think of my practice as a form of experimental investigation. I model my process on the methods of scientific activity, approaching each work as an experiment designed to test my conceptual premise through a performative framework. I test my ideas (and myself) ‘in the field’ –– undertaking actions that may span hours, weeks, months or years. These investigations take many forms –– I have lived in a gallery to document interplanetary time, I have walked across a country to measure the size of the Earth and I have tracked (and continue to track) the indeterminate occurrence of leap seconds. Each of these actions can be understood as stand-alone performances, but their function is usually more process-based. They fulfil a hypothesis and, in doing so, generate experimental data and performative artefacts in the form of drawings, text, photographs, and videos — an amassed archive of the experience of doing.

What’s on your mind right now?  I spend a lot of time thinking about the matter and methods of science, and the ways in which we measure experience. I am interested in the systems and structures that science creates, and the role these systems play in shaping the way we see the world. I’m intrigued by concepts that straddle scientific and societal use –– that we may not immediately register as scientific in nature. I’m drawn to fundamentals such as time, distance, definition and standardisation –– things that are integral to all scientific activity, but equally belong to the everyday world. I try to locate points within these concepts where precision and determinacy become slippery, speculative and whimsical –– where they no longer operate in the way that we think that they should. We have a tendency to assume that time and distance are systems that are fixed, absolute and totally infallible, but like all good human constructs they are simply tools (somewhat arbitrarily determined) that can be reimagined.

Time is fascinating in this context, because our conception of time is so deeply entwined with our experience of it. In my work How the Stars Stand (2015), I lived in a gallery operating according to time as it is experienced on Mars. Due to the difference in the planet’s rate of rotation, a Martian day (known as a sol) is 2.7% longer than a day on Earth –– equivalent to 24 hours and 39 minutes and 35 seconds of Earth time. To stage the work, I lengthened my ‘performative day’ to that of a sol, which meant as the work progressed my experience of time fell further and further out of sync with my surroundings. The duration of the action was determined by the length of time it took for my ‘day’ to fall out of sync, to completely invert and then return to synchronicity with Earth –– 37 days (or 36 Martian sols). It was important for me to commit to this full cycle so I could understand the machinations of time elsewhere –– how it would connect, disconnect and reconnect with the experience of time as we know it. Living by time as it was occurring on another planet was surreal. Time was constantly shifting without any point of visual registration –– no ‘day’ was the same as the last or the next. I couldn’t locate time by the position of the sun or the actions of people around me, all I had was NASA’s Mars24 clock (that I set my watch by) and the parameters of the action designed to keep me in check. I took a photograph every day at 9am (Mars Time) to provide structure and routine, with this archive becoming a visual record of the temporal variation that the work made visible.

How do you get this stuff out? Experiments offer a structure to the way we think about information, ideas and actions, and I find utility in this. Everything in an experiment is (ideally) done with a degree of intention –– with a sense of causality, and this aligns with how I think about conceptual practice and how I go about making my work. I try to consider the why of the thing that I’m doing –– does it serve a function, is there an internal logical consistency? Given that these are the questions I’m asking of science (and the world) itself, it feels only right that I also direct them toward my own work. As I transform an idea into action I begin mapping out the systems embedded within it –– searching for markers, loops and intersections that could be either strengthened or broken down. While I love systems, I think it’s still important to consider their history, their value, how they serve us, what they open up and foreclose, and how they might change.

My work étalon was conceived in this context –– as a re-examination of the metre. Even though I had used the metric system my entire life I knew nothing of its origins. I did not know that the metre was a length that had a direct relationship with the size of the planet (originally determined as a length 1/10,000,000th of a quadrant of the Earth) and was the consequence of an extraordinary seven-year journey by two French astronomers to accurately measure the size of the Earth by traversing 10º of latitude along the meridian between Dunkerque and Barcelona. I became somewhat obsessed with the story –– how the vastness of the landscape came to be distilled within this measure. It became clear that I wanted to understand it not only conceptually, but physically and emotionally also. So I conceived of my own experiment, a performative walk from Dunkerque to Barcelona in which I would remeasure the world for myself, creating a new ‘metre’ length from my own action. The work ended up taking 112 days to complete, spanning a distance over 2,000 km. In this time the landscape became not only a geographic but an emotional expanse –– one that tested every part of me. The act of measuring became an extension of my own body –– with each step, each breath, each bruise, each blister –– an attempt to personally measure up. I remain forever grateful to the eleven extraordinary women who each walked a section of the journey with me –– their support kept me going whenever I had doubt. By putting one foot in front of the other I eventually crossed a country, and produced a new metric imbued with the ambition to measure the world on one’s own terms.

What are the hardest things for you to get ‘right’ and what are your unique challenges? There is a particular dynamic to setting up my performative frameworks –– especially when I am dealing with duration. I must create a structure that will propel me forward, but I must also allow room for flex, so I can deal with the unknown or unexpected. Because of this, I really sweat the details when it comes time to build the methodology of the work –– I try to think through all the conceptual and logistical contingencies. The challenge then becomes trusting the decisions you’ve made and allowing the work to develop over (and through) time –– to let go of what you thought the work was and really allow the action to become its own entity. Changing between these operational modes can be jarring –– especially in the early weeks  –– as you’re now living inside the work itself.

Patience is also key –– and if I’m being honest, I don’t innately possess the kind of patience my work requires. I battle with patience constantly. But I have come to understand that this war within, this act of waiting –– is also part of the work. When I recognise the waiting as performative I become more accepting of it. 61/60 is a good example of this. It is an ongoing performative action that documents the occurrence of leap seconds with single-second actions. The staging of this work is dependent upon a slowing of the Earth’s rate of rotation which then necessitates the insertion of an additional second (known as a leap second) into our system of time. The last leap second to occur was in 2016 –– so I’ve been waiting for six years now and at this point it certainly feels like I am being tested. But then again, if you’re going to start working with the motion of planets you had better make peace with the fact you are on a cosmic schedule not your own –– and planets are not inclined to be rushed.