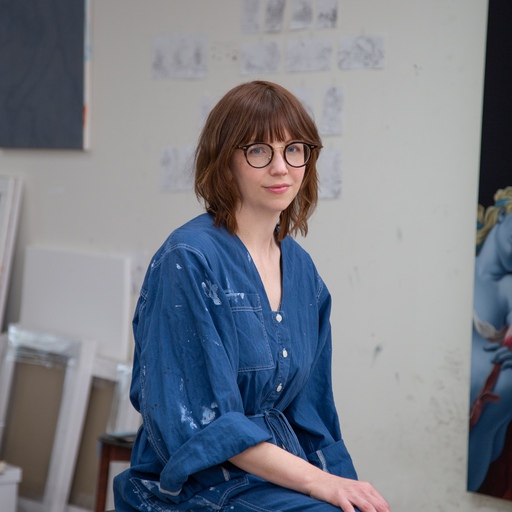 Jesse Mockrin’s rich and detailed figurative oil paintings reformulate and recontextualize images and symbols derived from art history, making references to Renaissance, Baroque, Rococo, Romantic, and Neoclassical painting, and casting familiar allegories and motifs in a fresh, contemporary light. Her striking compositions tend to center on one particular body part, object, or scene. Rendered against her trademark pitch-black background, its blank opaqueness reading as a boundless spatial environment, Mockrin’s style is surreal and disquieting, her subjects typically fragmented or cropped as if captured on the cusp of the painting’s borders or deliberately concealing themselves from the viewer. “The bodies in my paintings are often vulnerable to anonymous interventions coming from outside the frame,” she said in a 2020 interview with Document.

Some unknown power (2018) depicts three anonymous, faceless figures. One of them is held down, their hair being cut with scissors by a pair of disembodied arms. This work was featured in Mockrin’s 2018–19 exhibition Syrinx at Night Gallery in Los Angeles, the title of which was inspired by the wood nymph of the same name from classical Greek mythology. Syrinx was transformed by water nymphs into river reeds to avoid the sexual advances of the god Pan; Mockrin looked at numerous seventeenth-century painterly representations of women under duress to create a body of work that alludes to issues of threat and physical brutality.

In addition, she was also inspired by Renaissance depictions of witches and representations of hunting and game in European historical painting. In Summon and Remedy (both 2018), also in the exhibition, a group of nude figures gathers outdoors around a fire, engaged in a series of mysterious rituals. Mockrin often depicts her characters with a fluid ambiguity, both in their actions, which are left open to interpretation, and in their androgynous, nonprescribed appearance.

In Mockrin’s paintings, faces are often cropped; characters are left as ciphers of symbolic meaning. In the triptych Repetition cannot make it less, (2019), three headless, female-identified torsos in ornate and sumptuous jewel-colored silk gowns each press a dagger into the soft, exposed flesh of their chest. The work was shown in the 2019 exhibition The marks of a stranger at Nathalie Karg Gallery in New York, a response to the story legend of Lucretia, an ancient Roman noblewoman whose rape and tragic suicide caused a revolt that led to the founding of the Roman Republic, thus rendering brutality against a woman as a fable of honorable self-sacrifice. Mockrin employs these ancient instances of violence against women to draw parallels to conversations surrounding gender, feminism, and identity in the contemporary world.

How would you describe what you do? I make paintings. For the past four years, I have focused on extracting details from historical European paintings, recycling these past narratives and bringing them into our present context. For me these old paintings and stories function as an entry point into an ongoing conversation about images, time, and gender constructs.

What’s the most exciting thing about where you are in your career right now? I have some stability and some freedom, which is a sweet combination. The stability allows me to plan, to hire help, to create the conditions I need to make work. The freedom allows me to take risks and to pursue the work I most want to be making.

What’s on your mind right now? I have a solo show at Night Gallery in Los Angeles opening May 14. I’m in the final stage of the year-long process of preparing this show, so my thoughts are centered on completing these new paintings.  I am also enrolling my kids in summer camp, planning our summer vacation, and handling all of the other day-to-day matters that need attention.

What is a typical working day for you? After school drop off, I go to the studio. I try to take care of administrative stuff quickly (emails, family stuff), and then start mixing colors or refreshing my palette from the day before. Then I paint for 7, or 10, or 12 hours. I listen to music, podcasts and a lot of audiobooks. I paint in discrete sections so that everything will dry well, which means one day I’ll be painting skin, another day a piece of fabric, another day a tree, etc. I love it. I always wash my brushes at the end of the day, but if I’m running late I’ll pack them up to wash at home after the kids are asleep.

What are the hardest things for you to get ‘right’ and what are your unique challenges? Oil paint is mysterious and temperamental. Part of what makes it so satisfying as a practice is that it feels impossible to ever fully master. One of the things I obsess over is the surface finish of the paint. Dark colors tend to ‘sink in’ (dry lighter and matte) which is endlessly frustrating. I spend a lot of time obsessively trying to control this to keep the surface even.

To see more of Mockrin’s work, and that of the art world’s most gifted next generation, order a copy of Prime: Art’s Next Generation here.