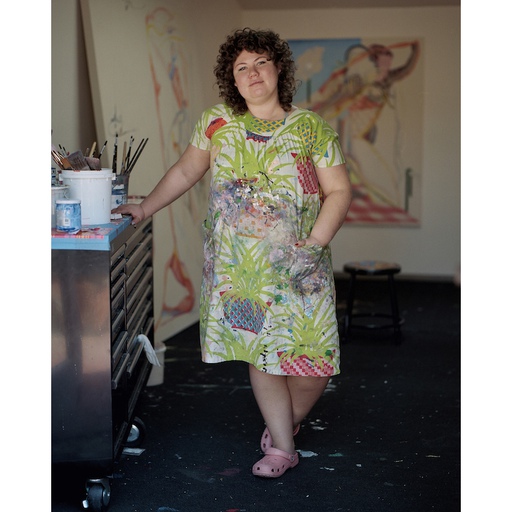 Christina Quarles’s paintings can provoke disorienting encounters: in her large-scale works and immersive installations, quasi-human forms jostle against each other. Around them, the vestiges of reality can be traced but not easily placed—Quarles draws inspiration from her surroundings, her past, and the light in her studio. Even her use of space defies the historical conventions of painting: her tangled, long-limbed figures push at the edges of the canvas or seem to burst out of the pictorial plane, unable to be contained or comfortably inhabit the frame—a metaphor for the way Quarles often feels in society.

Working against the trend for figurative painting, Quarles began experimenting with abstract, gestural lines while completing her MFA at Yale School of Art, where she found expressions that could do away with narrative and prompt a physical response in the viewer. As she explained in a 2017 interview with The Untitled Magazine, she sees her paintings as “grappling with a state of excess,” contending with the contradictory and competing parts of her own identity as a cisgendered, queer woman who is often misidentified as white. There are privileges attached to this assumption, but there is also pain in not being seen for who you are. The fragmented, slippery, and incoherent aspects of her paintings evoke these feelings of existing in a body that is in constant flux, trapped in a perpetual in-between.

Ambiguity is also paramount in Quarles’s work and is one of its definitive qualities. In the painting New Moon (2021), created after a long period of time observing the shifting light conditions in Los Angeles, she explores the theme of renewal: a full moon appears in a twilit sky, and at the bottom of the frame, Quarles alludes to fresh grass. The possibility of starting again and its implied sense of optimism, however, is undercut by ambivalence: the figure in the center seems to be forcibly wrenched through a portal into a new world, and it is unclear if they will end up somewhere better than the place they leave behind. Quarles revels in these fractures and fissures, bringing them vibrantly, vividly to life in beguiling visual worlds where excess is explored as a kind of ecstasy. Transcribing her experiences into the visual language of painting is a cathartic process that reveals the joy, jubilation, and pride of being. It is a space where legibility can be dissolved; here, Quarles finds limitless potential.

How would you describe what you do? I am an artist. I mostly paint and draw in the studio, sometimes I make installations. I have been investigating ambiguity, legibility, and intimacy in my practice for ages.

My aim is to paint portraits depicting the experience of being within a body, rather than looking at a body. Bodies are occupied by space in my work, collapsing and expanding as they run into shifting contexts. Because we are regularly defined by context, perception remains central to the language of my art. So often, we project a sense of solidity onto other people, while experiencing a multitude within ourselves. I try to articulate this feeling–of possessing alternate selves–within my work, shifting between fragmentation and cohesion.

What’s on your mind right now? I’m realizing complications of identity are made trickier as we become fully immersed in the digital realm–a process that the pandemic has expedited. Self-identification is allowed to co-exist and even pre-exist our relationships with others–our pronouns are in the same line as our names which sit below our faces in a Zoom meeting. There’s an expanded amount of self naming that happens in the digital context. Lately, I’ve had an interest in how complicated it is when we need to name ourselves, because in some ways we’re the worst authors of who we are.

We know ourselves in different contexts, we know how much we can shift and change. We have such a unique perspective of our own sense of selves, whether it’s looking at our own body, or the way we feel when we’re in different spaces–with family, with loved ones, in our professional lives, or with strangers.

Perhaps we’re not the best ones to declare who we are to the world because of the limits of language and perception. Something I’ve always thought about and turned to with art, is the way that you can have simultaneous and often contradictory information still be seen as harmonious. Image can articulate inconsistencies, and overlays can pronounce experience in a way that self-declaration can’t. It’s less linear, than for example making sense of yourself immediately through social media or Zoom.

How do you get this stuff out? I Improvise. I allow the work to emerge through process, usually drawing on experience from what I’ve already painted. Composition gets determined as I work through a painting—it’s not something that’s decided beforehand. I begin with a series of fragmented gestural brushstrokes that come from a sort of muscle memory developed from decades of figure drawing. I resist the urge to complete the form with these initial marks and instead will interrupt the process by stepping back to look at what I’ve laid down. I try to challenge myself to connect these fragments in a way that was not my initial intention, to invent new poses, ones I haven’t seen before.

There is always a back and forth between my intention and what is actually in front of me. Because I am not working from sketches, the painting is not trying to be anything other than what it becomes. I am informed by both my intended marks and those that happen to occur, like drips or bleeds. Eventually, the figures take shape and I’ll photograph my work and bring it into Adobe Illustrator to work out the patterns and planes. Though it is digital, there is still that same interaction between intention and accident. Often an unintended glitch in my digital drawing will lead to a new direction for the composition.

What do you think categorizes your artistic generation? I see a call for representation to be a defining characteristic of my generation. There is a demand for inclusion by those of us who have been historically underrepresented and a call for equity and transparency across the institutions that make up the artworld. When inclusion begins to permeate all levels of the artworld, artists are no longer bound to making art that speaks for their communities but can begin to make art that speaks to, through, and with their communities.  This creates the potential for conversations about race, gender, sexuality, and location to become more nuanced, to open up a space where declaration gives way to dialogue.

What are the hardest things for you to get ‘right’ and what are your unique challenges? It took me a long time to know when a piece was “done.” I think a lot of young artists struggle with that. But lately I’ve begun to realize that a piece is done when I no longer look at the piece as its maker but instead become immersed in the piece as a viewer.

To see more of Quarles’s work, and that of the art world’s most gifted next generation, order a copy of Prime: Art’s Next Generation here.

Previous articleCurator at Large: Exhibitions to see in May
Next article“Between Mountains, Valleys” by Photographer Athena Torri