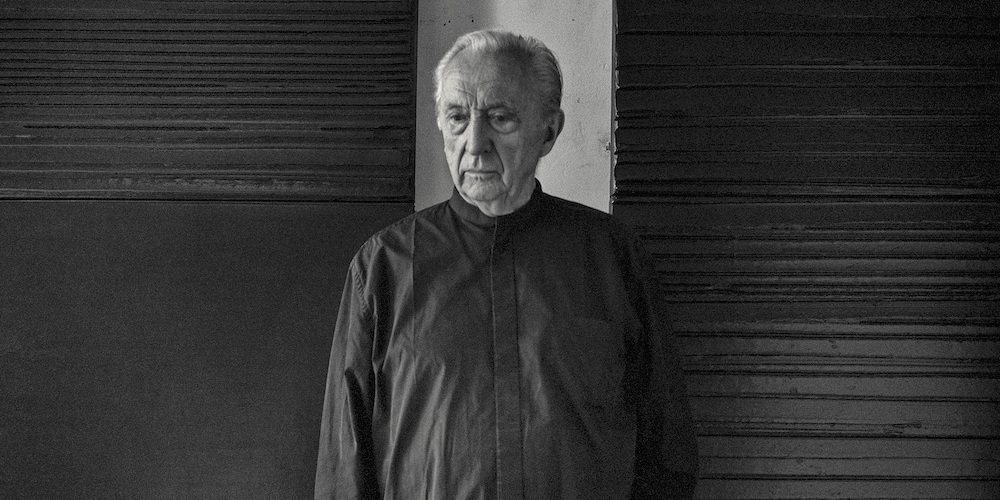 French painter Pierre Soulages, known for his luminous black monochrome paintings, died October 26 at the age of 102. Characterized in 2014 by France’s then-president François Hollande as “the world’s greatest living artist,” Soulages over a career that spanned more than eight decades relentlessly focused on the inky hue that he claimed had first attracted him as a child, producing massive, gleaming works that ultimately earned him France’s Grand Cross of the Legion of Honor, a retrospective at Paris’s renowned Centre Pompidou, and his own museum. “My instrument is not black but the light reflected from the black,” he told Beaux-Arts magazine in 1996. “Each of Soulages’s canvases,” wrote Donald Kuspit in a 2019 issue of Artforum, “is like a phoenix that has risen from the ashes.”

Pierre Soulages was born in Rodez, France, on Christmas Eve, 1919. Struck at the age of sixteen by a reproduction of a prehistoric cave painting of a bison from the Altamira cave in Spain, he began investigating antiquities at the local Museum Fenaille. Under its auspices, he participated in an archaeological dig in which he uncovered objects that remain on display at the institution today.  Of particular and enduring interest to him was the use by prehistoric cave painters of black in their paintings, despite the dim conditions in which they toiled, and which he would soon bring to bear in his own work, having discovered that he wanted to be nothing other than a painter. “I realized that most people waste their lives earning a living,” he told Interview magazine in 2014, “and I wanted to live.”

Soulages at the age of eighteen moved to Paris, and returned there after being drafted into military service during World War II. His paintings of this era often featured a few walnut-colored strokes on a white background, and are often viewed as evoking France’s implosion amid the conflict and his own bitterness over his native country’s fate. Soulages first exhibited his work at the 1947 Salon des Indépendants; a decade later, as Abstract Expressionism surged in the United States, his work appeared in two important exhibitions there: the 1953 “Younger European Painters” at the Solomon R. Guggenheim Museum in New York, and the 1955 “The New Decade: 22 European Painters and Sculptors” at the Museum of Modern Art in the same city.

By now, Soulages had turned to abstractions featuring one or two colors; by the 1960s, however, he had made black his signature. In 1979, he doubled down on noir with an even deeper version of the hue that he called “black plus” or “outrenoir,” in colossal, glossy, textural canvases that he created by thickly layering paint and digging into it, scraping it, or removing sections of painted canvas to create shallow troughs. Soulages would mine this vein until the end of his life. “He has never stopped being generative, despite the fact that his trademark hue is ‘a totally dead silence . . . a silence with no possibilities,’ as Wassily Kandinsky wrote,” noted Kuspit. “His briskly varied strokes—flamboyant or calm, sharp or slapdash—are exquisitely nuanced and fresh.” Soulages frequently hung his works close together, en masse, or in the center of a wall. “A window looks outside,” he told Interview, “but a painting should do the opposite—it should look inside of us.”

Given the longue durée of his career, Soulages’s work necessarily fell in and out of fashion in the art world. He was  rewarded for his steadfast commitment to painting, earning numerous honors, including the American Carnegie Prize, the German Rembrandt Prize, and the Japanese Praemium Imperiale. His work is held in the collections of major institutions the world over, including the Museum of Modern Art, New York; the National Gallery, Washington, DC; Tate, London; and the Centre Pompidou, Paris, as well as in the museum dedicated to his work, Musée Soulages in his hometown of Rodez. Questioned about his longevity nearly a decade ago, Soulages was sanguine. “What’s my secret?” he asked. “I just keep thinking about the painting I’m going to do tomorrow.”