Outside Perspective: Art and the Dismal Science – RedDotBlog 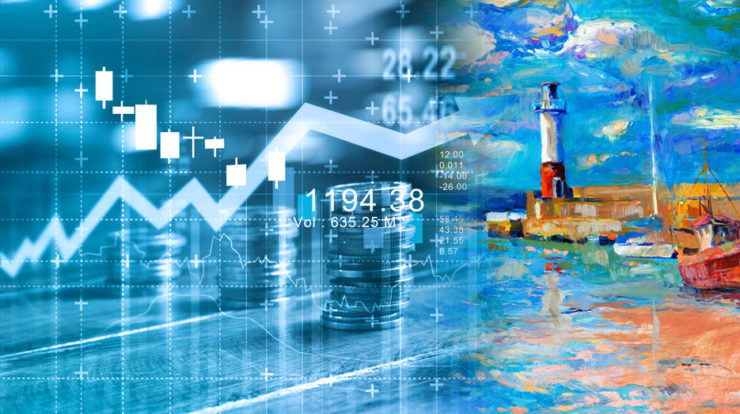 Outside perspective brings insights from experts. This post comes to the RedDot community from Andrew Currie, an economics instructor, and painter based in California.

Many years ago, I was in a Nevada County coffee shop where a couple had just installed an exhibit of cubist-surrealistic paintings. They then sat down on the sofa opposite me and started to draw up a price list. The woman wanted to charge high prices, based on the argument that rich people buy art. Her male partner countered that there were many other people exhibiting in the area, in both coffee shops and nearby galleries, thereby explaining his view that they should keep prices low.

It is hard to say since there is an economic justification for both points of view. The purpose of this brief article is to present some economic concepts that readers might want to think about in pricing their works; not in galleries or juried art shows, but in coffee shops, restaurants, Etsy, and other venues geared toward the low-end of the price scale. For the sake of brevity, only four concepts will be addressed; three relating to demand, the other to supply.

Markets characterized by product differentiation – as is the case with the art market – are called price searcher markets. Why? Because sellers know that there is a tradeoff between price and the quantity demanded for their product, but they don’t know the specifics of that tradeoff. It is because of this imperfect information about demand that sellers usually have to search for good price points for their product, often through experimentation. The implication is that aspiring artists should be willing and able to be flexible in pricing their works. Specifically, they should listen to the market and respond accordingly instead of setting rigid prices based on what they would like to receive rather than what the market is actually offering.

Another demand issue relates to the comment made by the female Nevada County artist who noted that rich people buy art. This is because artwork is a luxury good; one in which a person’s spending on that item will be greater than proportional to a change in income. For instance, if my income rises by 10 percent, but my spending on artwork increases by 20 percent, that would make art a luxury good, which, in fact, it is. The luxury-good aspect of art is important, but not so important as to override price elasticity.

The price elasticity of demand is nothing more than a measure of consumers’ responsiveness to prices. If consumers are very price-sensitive, the item would be described as being price elastic over that price range; if they are relatively unresponsive, their demand would be price inelastic. A significant point to realize is that the availability of substitutes is the primary determinant of price elasticity: the greater the number of substitutes, the greater the price elasticity of demand. The significance of this point is that if you are in a market with a lot of other people selling works of a similar quality as yours, it might be necessary to keep your prices low enough to compete with those other sellers. This is not to suggest that a low price will necessarily sell a work; I’m instead suggesting that a seller should take a look at what other artists are charging for similar works in the same venue, and not stray too far above or below them.

Returning to the Nevada County artists, whose side would I line up on?

The male painter’s. The reason for this is that luxury goods are often bought by the wealthy, but there is a secondary aspect of luxury goods that also has to be considered: they have a lot of substitutes. It is the prevalence of these substitutes that explains why most luxury goods are price elastic with respect to demand. Quite often the substitutes will be obvious, other times, not so much.

For example, suppose you are a landscape painter who works in oils. What are substitutes for your works? Oils in different genres? Certainly. Landscapes in different media. Definitely. They would also include any number of other luxury goods of a similar price. Thus, other substitutes could include a sculpture, a great bottle of wine, a good meal at a restaurant, a massage, or any other extravagance that we might not initially think of as a substitute for a landscape in oils. When looked at in this light, it should be realized that you are not only competing in the art market itself, but also the highly competitive market for luxury goods. It is for that reason that the demand for most luxury goods is price elastic; thereby giving support to the male painter’s suggestion to keep prices competitively low.

Economics has been described as the dismal science. In some respects, it is an apt description, but when it comes to pricing something as subjective as artwork, it is not a science – it is an artform unto itself.

Consequently, for aspiring artists, it is imperative that they give as much thought and attention to the pricing of their work as they do to its creation. Should they do so, they will give themselves a better chance of becoming professional artists rather than starving ones.