One to Watch: Oliver Pavic: Between the Old and New 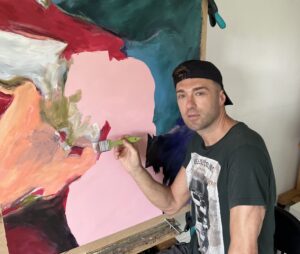 “I paint in the hope that my artwork isn’t indifferent and that it evokes strong, meaningful reactions,” says self-taught artist Oliver Pavic (also known as “artozann”). Oliver’s paintings are anything but indifferent in their dramatic figures, contemplative construction, and moody palettes.

Born in Yugoslavia, Oliver says he grew up “idolizing the free Western lifestyle,” and he carried his impulse for self-expression to London. There, as an architecture student, Oliver had the opportunity to see the 2008 Francis Bacon retrospective at Tate Britain, an exhibition which he remarks had a profound impact on his life and work. Now based in Picardy, France, and fully immersed in his painting career, Oliver echoes Bacon’s raw, highly textured, and emotive approach to the human form in his own figurative paintings. But he also taps into a larger historical dialogue. Lately, he has drawn on Grand manner, an eighteenth-century British style referring to classically informed paintings that evoke the values of nobility. In his most recent series, Solace, Oliver pits the grandeur and idealism of this style against the complexities of contemporary life and the psychological impact of COVID in particular.

“While in lockdown, I was able to assess who I am as an artist,” Oliver recalls. “The majority of paintings from this period are self-portrait visual diary entries, exploring the relations between old and new and the emotions felt in a world changed by the pandemic.”

From his contemplation of old and new emerged a series of enigmatic portraits, visceral in their texture yet ambiguous behind the rapid swaths of brushstrokes that conceal the subject’s faces. The familiar genre of portraiture, and his quotation of the Grand style, coalesces in a sense of comfort for Oliver. “The portraits take solace among classical compositions, using contemporary deconstructive techniques, and are deliberately ambiguous and anonymous,” he says.

This ease, however, is complicated by those deconstructive practices and the sweeping abstraction that characterizes the skin of the painted subjects. This is where experimentation arises, and Oliver works intuitively to empty out the subject’s identity, allowing the viewers to see themselves in the figure, a tendency that occurs across Oliver’s works. “I am interested in how texture relays the emotions, and how the application and manipulation of [texture] expresses the narrative,” he explains, “I paint with open interpretations and allow the viewer to see [their] own reflections, physical or mental.”

In bridging a classical academic style with the echoes of Francis Bacon’s destabilizing figuration, Oliver makes the canvas into a space of contemplation—both of our own emotional transformations, perhaps resulting from COVID, and the change of the subject throughout the history of painting. An equally dialogic process underpins this suspended moment of confrontation between the old and the new. “I paint in layers over several weeks allowing myself to view the artwork through different moods, time, and light,” Oliver explains. “Once the painting starts to express itself, I sign it and let it take its own Journey.”

Speaking broadly of his approach, Oliver says, “As an artist, I create through techniques of figural deconstruction and recomposition. I reclaim subjects and distress, disfigure and strip away their surface. Through a constant dialogue with materials, I dismantle and re-interpret forms in order to create anew.”

Oliver’s moody portraits also recall the drama of contemporary figurative painters Nicola Samori and Adrian Ghenie, both of whom Oliver cites as sources of inspiration. These artists are part of a wave of current figurative painters exploring historical modes of representation and bringing to bear the dynamics of power and memory that define that history. In their presentation of old and new and in their parsing of the human figure, Oliver’s portraits invite viewers to locate themselves within the historical narrative.

Love reading about all things art? You can have articles from Canvas, curated collections, and stories about emerging artists delivered straight to your inbox. Sign up for the Saatchi Art Newsletter.

How-To: How to Shop Art for the Entryway

How-To: How to Collect Drawings