On deep time and material poetics 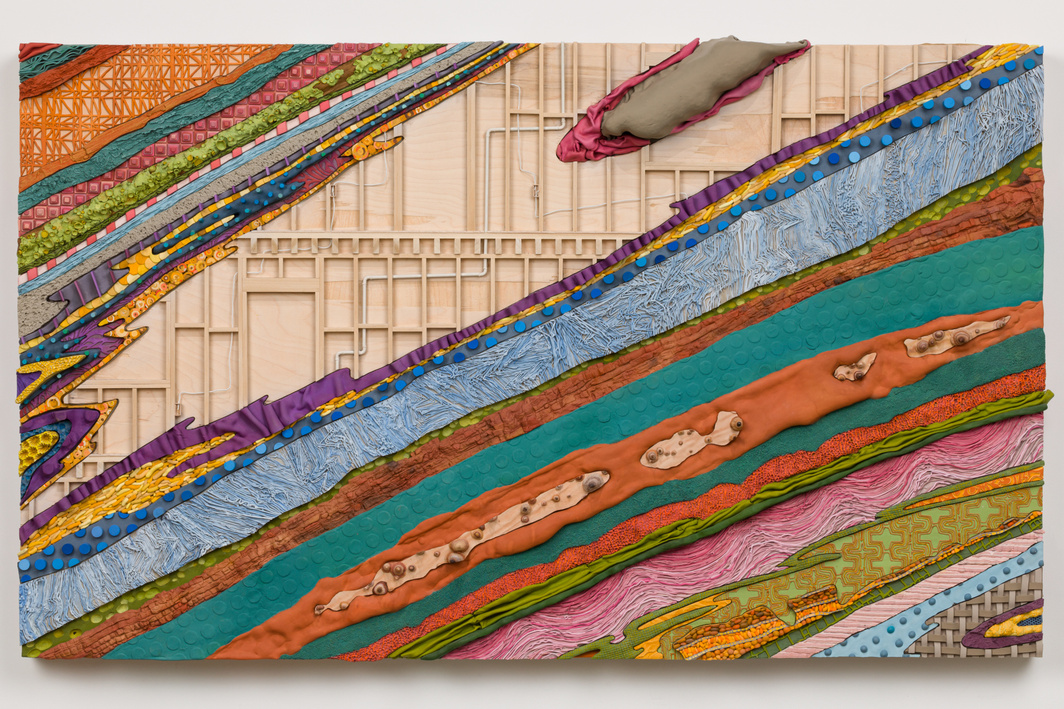 For over three decades, Roxy Paine has created virtuosic sculptures that examine how technological mediation processes and reformulates nature. His most recent work takes the shape of painted grids of extruded epoxy that transpose immaterial pixels into sculpted cubes in relief. The resulting image is often at odds with its surface, recalling the process of serigraphy or the painstaking pointillism Georges Seurat. These recent paintings and dioramas form the core of Paine’s exhibition “Sedimentary Lens,” on view at the SCAD Museum of Art in Savannah, Georgia, through January 23.

GEOLOGY DREW ME TO MONTANA, where I currently live and work after many years in New York City. The biggest change I have experienced in Montana is how I perceive time. In New York, you are inherently stuck in shallow time, whereas in Montana, you are constantly reminded of a different scale while gazing at mountains. Of course, if you go to the Catskills, you feel temporality in a different way, rounded stone worn down epochs ago. In Montana, I see the uplift and slow-motion violence of planets and plates. I feel time on a geologic scale. Robert Smithson is an important touchstone for me in terms of thinking about timescale; I don’t know any other artists tuned in that way. I think Smithson’s gravitation toward the American West was also an inspiration.

The pixelation works in the exhibition evolved from constant experimentation; when syncing this with ideas, the work is propelled forward and ferments. One cannot exist without the other, otherwise the work is incomplete. First came the sedimentary stratigraphic pieces whose layers are composed at the borders of the organic and industrial, existing uneasily between those worlds. I have accumulated different meshes over the years as a sculptor and realized through play that I could make a new kind of painting using these materials. There is always a lot of physical labor in the process.

In thinking about a pixelated realm, I’m pondering how technology chunks information into component parts. While making drawings, I circled back to ideas of the cave. An aperture, lens, or camera obscura, the cave is a place tied to our Homo sapien history as well as the origin of art, or at least the oldest remaining records of it. For me, the cave evokes technological filters and how humans need to parse information obsessively into component parts. Similarly, in my “Dendroid” sculptures, I’m investigating how humans see this gigantic organic entity and dissecting this organism cell by cell, component by component.

The diorama works are also pixelated caves. I have long been obsessed with the lens through which we perceive the world, histories, and time. Dioramas are also lenses onto these abstractions, reflecting our evolutionary development and what drives our brains, which is often a mystery. These dioramas are lenses onto the psyche and our pasts.

I’m also interested in how information is received and processed through algorithms and how that changes our brains over time, but nothing in this show uses algorithms. My work is made in analog, which is a contradiction that interests me. I want to take what is so instantaneous about machine learning and slow it through making: What was lightning fast is now languid and suspended in the laboratory of process. We are bundles of contradictions—to accept this and be aware of it fosters a more dynamic way of living. When humans strive for purity, we are in serious trouble and do nasty things. I distrust purity as a concept; I’m far more interested in the idea of humans as corrupted files.

When I try to understand a new material, I approach it as a language. At first one is unable to speak fluently, but with time, process, and work with that material, my hope is to someday write something meaningful or poetic in that language. The most poetic work in show is the Fungal Flag no. 2, 2021, which reinterprets this object people stomp on or raise high to express their superiority. Although some might say the American flag is overused, especially in art, there is something elemental in the idea of humus in the ground and bacteria rotting life. I am taking a loaded, heavy-laden symbol and, in a perverse display, creating a poem.

— As told to Greg Lindquist