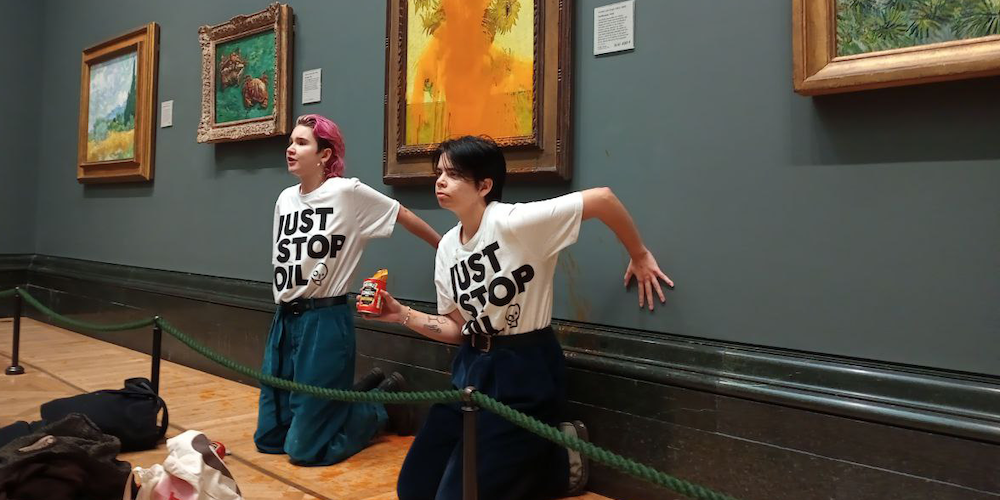 Ninety-two museum directors from around the world have signed a statement from the International Council of Museums (ICOM) condemning the recent actions by environmental activist groups such as Just Stop Oil, who have over the past few months targeted famous artworks in viral and divisive efforts to raise awareness of and spur action on the deepening climate crisis.

The signatories—who include such Hartwig Fischer of the British Museum, Max Hollein of New York’s Metropolitan Museum of Art, Glenn Lowry of the Museum of Modern Art, and Laurence des Cars of the Louvre—claim that the protestors “severely underestimate the fragility of these irreplaceable objects, which must be preserved as part of our world cultural heritage.” Members of the UK-based Just Stop Oil group are known to glue themselves to the frames of iconic works of art and douse the glass protecting paintings in foodstuffs such as tomato soup, as with Vincent van Gogh’s Sunflowers last month. Activists unaffiliated with Just Stop Oil have staged similar demonstrations in Germany, Australia, Spain, and Italy. Earlier this month, two Belgian protestors were sentenced to two months in prison after gluing themselves to the glass shielding Vermeer’s Girl with a Pearl Earring, despite the 1665 canvas suffering no damage. Art institutions have responded in recent weeks by upping security presence and, in some cases, confiscating cell phones and cameras.

“As museum directors entrusted with the care of these works, we have been deeply shaken by their risky endangerment,” reads ICOM’s release, which also posits that museums should remain sites of “social discourse.” The statement arrives as officials from nearly two hundred countries assemble in Egypt for COP27, the 2022 United Nations Climate Change Conference, to discuss goals related to climate change.