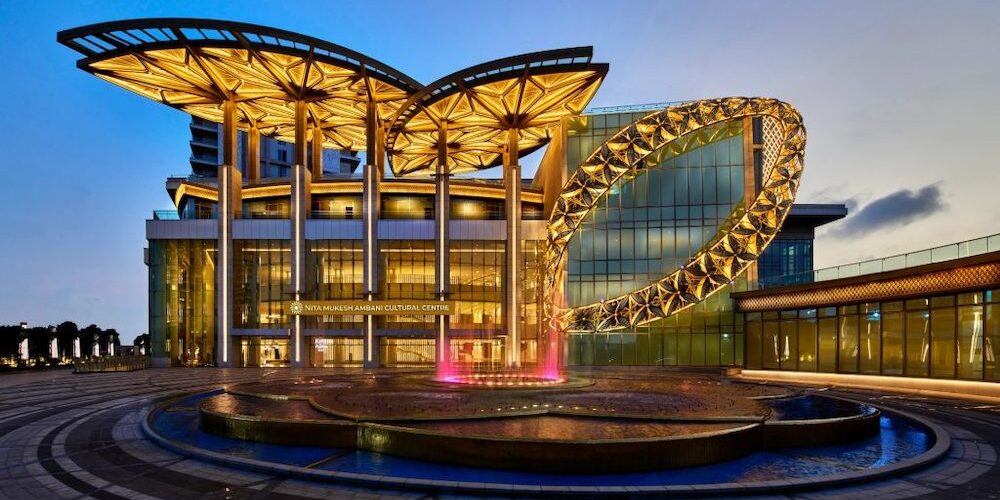 A massive new cultural center hosting art, performance, and fashion will open next March in Mumbai, courtesy of its founder, philanthropist Nita Ambani. The Nita Mukesh Ambani Cultural Centre (NMACC) will comprise roughly 16,000 feet of exhibition space and three theaters—one of which will seat 2,000 and feature a lotus-petal ceiling installation made of 8,400 Swarovski crystals—housed in a three-story building set within the Jio World Centre. The cultural and business hub, which occupies Mumbai’s Bandra Kurla Complex neighborhood, is also funded by Ambani and encompasses two convention centers, one of them India’s largest, as well as three exhibition halls, numerous meeting rooms, and an enormous ballroom.

Scattered throughout the NMACC will be various art installations. The center has made public the plans for its inauguration, which include an exhibition cocurated by American gallerist Jeffrey Deitch and Indian cultural theorist Ranjit Hoskote. Titled “Sangam Confluence, the show will bring works by Indian contemporary artists into conversation with those by Western artists who cite India as an inspiration. Also on view will be an exhibition curated by Vogue editor Hamish Bowles investigating the how Indian fashion and textiles have influenced global clothing styles between the late eighteenth century and today; included in the display will be a variety of garments loaned by London’s Victoria & Albert Museum. As well, Indian playwright and director Feroz Abbas Khan will direct a performance exhibition incorporating dance, music, and puppetry and themed around India’s journey as a continuous civilization.

Ambani, who sits on the board of New York’s Metropolitan Museum of Art, is a former Indian classical dancer and the wife of billionaire businessman Mukesh Ambani, chair of energy and retail conglomerate Reliance Industries and the second-wealthiest man in India. In a statement, she acknowledged that she hopes the center “will make art more accessible to all Indians while connecting Indian contemporary artists/designers with the rest of the world.”

Previous articleArtist Spotlight: Peter Smyth
Next articleBoo Saville: ‘I want to create an experience where you are hit in the eyeballs with intensity’