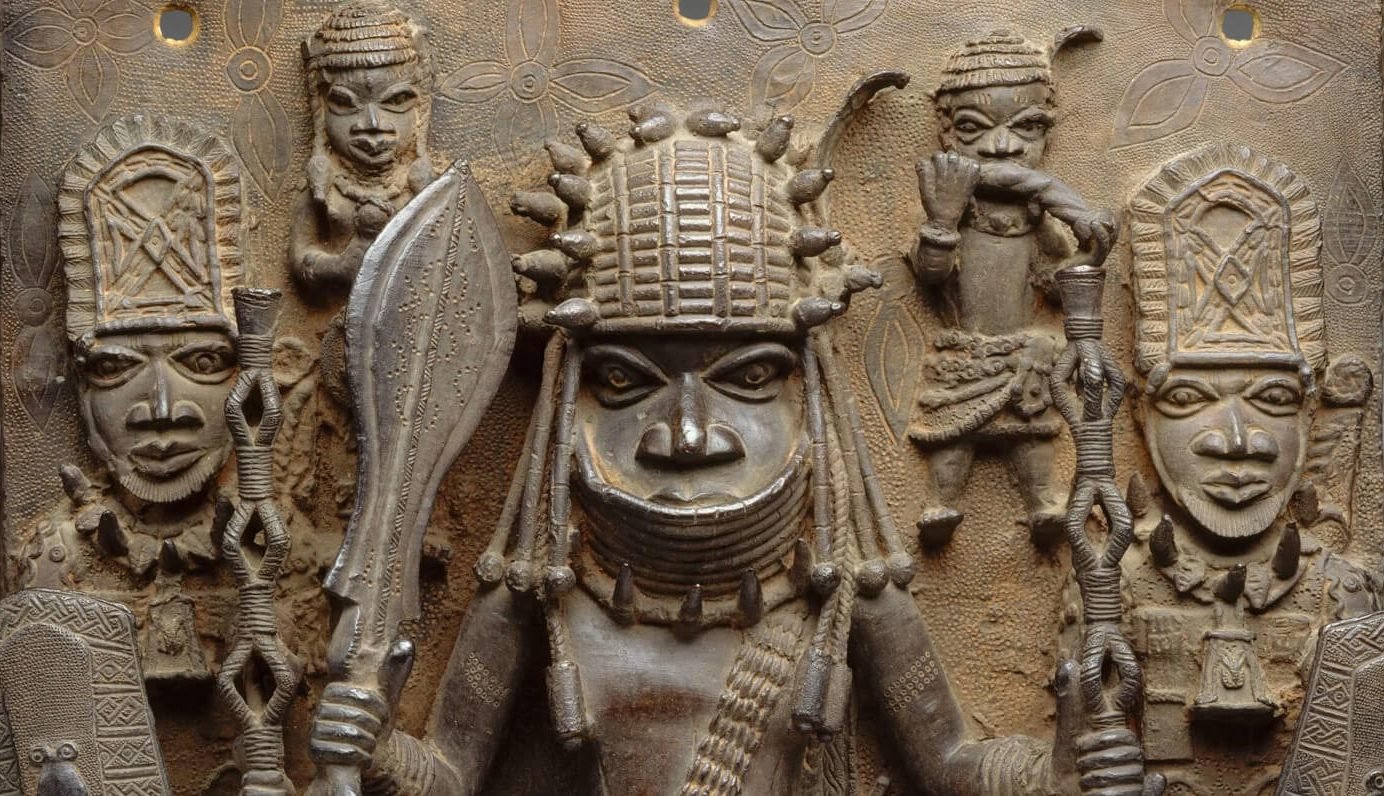 The Kingdom of Benin was a powerful West African state of the Edo People from the 13th century to 1897. It existed in the area of modern Nigeria near the mouth of the Niger River where it dominated a vibrant international trade system. The Kingdom of Benin exported black pepper, textiles, and ivory; it also imported durable metals such as copper, zinc, and tin. The kingdom’s capital, Benin City, boasted the large Royal Palace of the oba (king) that was decorated and filled with precious artworks. It was during this culturally rich epicenter that Warrior and Attendants was created.

An unnamed Edo artist created Warrior and Attendants during the 16th or 17th century. It measures 18 ¾ inches high (47.6 centimeters), 15 inches wide (38.1 centimeters), and 4 ¼ inches deep (10.8 centimeters). The composition has seven figures—including one central warrior chief, two flanking soldiers, and four small servants. The sculpture and attached background are entirely made of brass. Warrior and Attendants is an alto-rilievo (high relief) sculpture since more than 50% of the sculpture projects from the background. The greatest projections occur with the figures’ arms, weapons, and shields.

In the center of the relief sculpture and figural group is the warrior chief. He is the largest figure and, therefore, has the highest rank and authority of the group. It was very common in African art, most famously in ancient Egypt, to use hierarchical proportions with their figures. The most prestigious figure, such as gods, goddesses, kings, and queens, was depicted the largest, then royal family members followed by high-ranking officials, warriors, and nobles, accompanied by their entourage, then servants, and finally slaves and enemies. In this Benin artwork, the absence of the oba (king) makes the warrior chief the most important person, hence, the largest person.

The warrior chief wears a thick helmet studded with hard coral pieces. Decorative elements of the helmet, or possibly hair dreadlocks, cascade to his shoulders and terminate in round coral beads. His neck is piled high with necklaces to the extent that his chin and lower lip are covered by the accessories. A large leopard-tooth necklace rests around his collarbone while leopard spot scarification marks surround his upper arms and lower torso. The leopard was one of the principle symbols of Benin authority; leopard elements would be regularly worn by prestigious generals and kings to showcase their power and majesty.

To the left and right of the warrior chief are two soldiers. They wear large headdresses with what appears to be a ruffled edge of feathers or leaves. They too wear leopard-tooth necklaces, which indicate they are not lowly soldiers but high officers reporting to the warrior chief. They hold large shields with thick decorative borders and elegant central motifs. Their shields are not for actual warfare but for ceremonial display.

This argument is supported by the ceremonial sword held by the warrior chief with its incised patterns and decorations. Like the shields, the sword is not battle functional but symbolic of honor and loyalty to the oba (king). The ceremonial context continues with the spears in the left officer’s hand and the warrior chief’s other hand. They are visually complex with three tethered openings in their handles and with exquisitely patterned blades.

Surrounding the warrior chief and his two officers are four servants. These attendants are significantly smaller with heights roughly one-third to one-half of the chief. Their small size indicates their diminished importance in the scene. While they support the relief’s narrative, they are not the principle subjects. One servant holds a fan to cool the chief, one is blowing into a trumpet to announce the chief’s arrival, and one holds a box of kola nuts as offerings to the oba (king). Unlike the chief and officers, the servants’ necklaces are simple, without leopard teeth. They do not have any authority due to their servile roles.

Warrior and Attendants is a brass plaque that originally decorated the exterior of the Royal Palace in Benin City. The palace boasted large courtyards and galleries held aloft by many solid wooden pillars covered in brass artwork. Warrior and Attendants was one of these many artworks showcasing the Kingdom of Benin’s majestic culture. Other pieces showed an oba (king), others showed queens, some had commoners, etc. Each piece was designed to represent an element of the kingdom’s society. This piece focused on its brave warriors. When the relief was in-situ (in place) and polished, it must have gleamed brilliantly in the bright African sun. Its shine must have been a dazzling reflection of the powerful Benin army.

Like many masterpieces from the Kingdom of Benin, Warrior and Attendants is not currently held in a local African collection. Modern Nigeria does not possess many of its historical masterpieces because of the colonial pillaging and exploitation during the late 19th and early 20th centuries.

Warrior and Attendants is currently within the African collection of the Metropolitan Museum of Art in New York City, USA. The work acts as a Nigerian cultural ambassador to the USA. However, many Edo People and repatriation promoters believe it should be returned to its homeland in Nigeria. Where do you fall on the repatriation question? Whatever position you may take, there is one position that cannot be denied: Warrior and Attendants is a masterpiece of African art. It encapsulates the beauty of Africa and its people. Black is beautiful. Black is art.

Previous articleAnnouncing NYCC 2022!
Next articleAsk a Gallery Owner | Should Artists Brag About Their Sales? – RedDotBlog