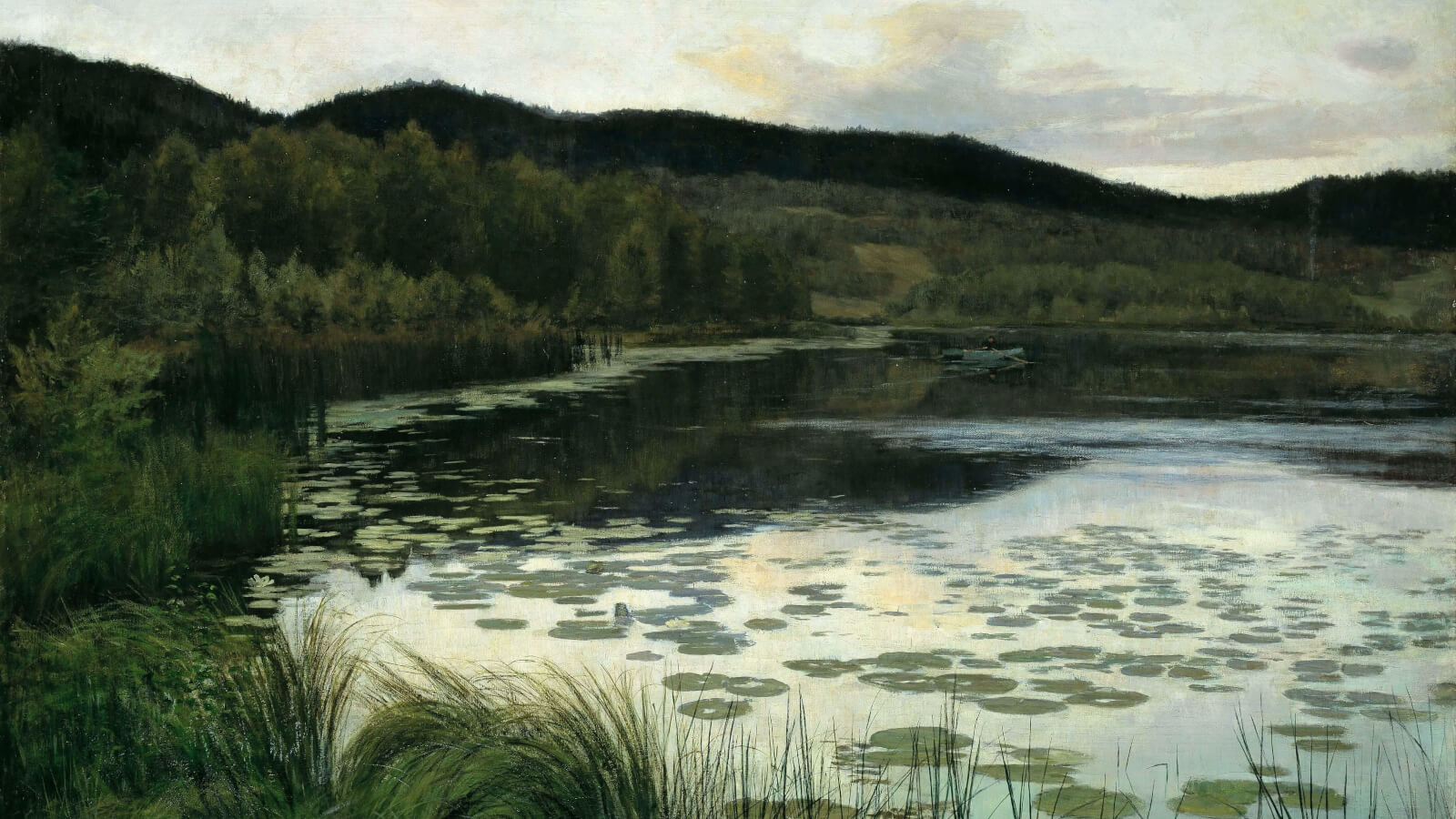 Kitty Lange Kielland (1843–1914) was an extraordinary woman. In 1878, at age 35, she moved from her hometown of Stavanger, Norway to Paris, France. She became a professor at Académie Colarossi in 1883 and co-founded the Norwegian Association for Women’s Rights in 1884. She exhibited her works at four World Expositions in 1885, 1889, 1893, and 1900. Finally, she was recognized by the Danish government in 1908 by being presented the Kongens fortjenstmedalje, the King’s Medal of Merit. This medal is similar to a lifetime achievement award for Kielland’s artistic contributions to society.

Summer Night is undoubtedly Kitty Kielland’s masterpiece. She painted it in 1886 with traditional mediums of oil on canvas. It measures 39.6 by 53.3 inches or 100.5 by 135.5 centimeters. The painting captures a view of Dælivannet, a lake, located on Fleskum Farm in Bærum, Norway.

Kitty Kielland captures Dælivannet in the waning light of a Nordic summer evening. Since Dælivannet and Fleskum Farm are near the Arctic Circle, they receive the sun’s light at a much lower angle, causing polar days known locally as bright or white nights. This atmospheric condition creates a bright silvery sky as captured in Kielland’s Summer Night.

Summer Night was painted en plein air (outdoors) as popularized by French Impressionists earlier in the 19th century. Kielland captures the details, lights, and colors of Dælivannet and its surrounding landscape through direct observation and experience. Painting en plen air allowed Kielland to capture spontaneous details such as the occupied rowboat in the lake and the windblown rushes in the foreground.

Unlike French Impressionists who mixed complementary paint colors, Kitty Kielland mixed similar shades to achieve purer and more brilliant versions. Some art historians classify this blending technique as the difference between Impressionism and Neo-Impressionism and therefore place Kielland as a Neo-Impressionist. Regardless if you follow this mindset or not, there is no doubt that Summer Night uses the technique to masterful skill. The bright silvery water echoes the silvery sky. Dark grasses and mountains frame the scene and add a poignant contrast, emphasizing the twilight moment. The sun is on the unseen horizon and it casts its last rays upon shadowy forested hills and a calm placid lake.

The National Gallery in Oslo, Norway bought Summer Night directly from Kitty Kielland in 1886, just one year after its creation because they recognized its cultural importance. Summer Night was created during the Fleskum Summer in which several Norwegian artists established an artists’ colony on Fleskum Farm in the summer of 1886. This artistic summer experience, known as the Fleskum Summer, is recognized as an artistic turning point in Norwegian art history. It was a transient and impermanent experience that left timeless and permanent theories upon late 19th and early 20th century Norwegian art, such as capturing the details, lights, and colors of a fleeting moment. Summer Night certainly achieved this goal. It is a beautiful landscape painted by an artist who isn’t well-known enough today. Kitty Kielland deserves wider publicity.