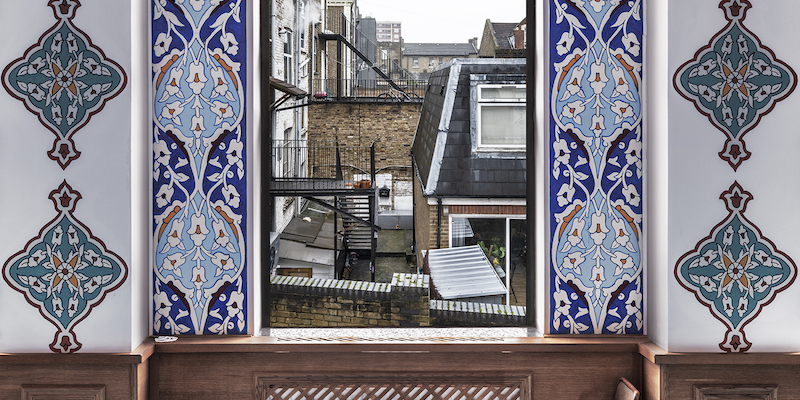 Marwan Bassiouni’s ongoing series of photographs “New British Views” (all works 2022) offers landscapes of a changing terrain marked not only by the continuing fallout from Brexit but also by the stagnant social policies of a country that has yet to fully reckon with its evolving demographics or the lasting legacies of its eclipsed empire. Printed at a near life-size scale, the images have an astonishing clarity about them; the window-framed vistas of urban Lidls, old English churches, row houses, and suburban streets studded with minivans and sensible sedans feel, at times, almost three-dimensional, though without the special glasses or overt gimmicks of trick photography. The interiors are clipped and crisp, often in contrast to the more ramshackle exteriors. For instance, in New British Views #6, an ornamental mural traces teal and ultramarine up and around an arched casement. Tucked under the sill, the wooden lattice of an air vent echoes the Escheresque assemblage of cast-iron fire escapes, corrugated steel shed roofs, and mismatched bricks girding the courtyards outside. New British Views #17 features a dim room with large gridded windows that stand watch over an empty intersection. Inside, the elaborately patterned carpet echoes the gilded bindings of the books lining a low shelf. Only upon closer inspection does one realize these are prayer books. While they survey a nation in flux, Bassiouni’s photographs are united by one constant: They are all shot from within mosques or prayer rooms.

The images’ immersive character derives from a marriage of scale and the seamless stitching of composite photographs so that every element and every surface is uniformly lit. In this sense, Bassiouni is using the camera to address and correct its own limitations. The resulting hyperclarity can be confusing for eyes accustomed to being guided by focal points. Rather than merely pantomiming the politics around demographic shifts, the artist insists that viewers actively see what is already there.

Previous articleNew Mural by 2501 in Bolzano, Italy
Next articleWhat Would You Do? The Client Who Won’t Finish Paying – RedDotBlog