Many Galleries are Closed on Mondays . . . – RedDotBlog 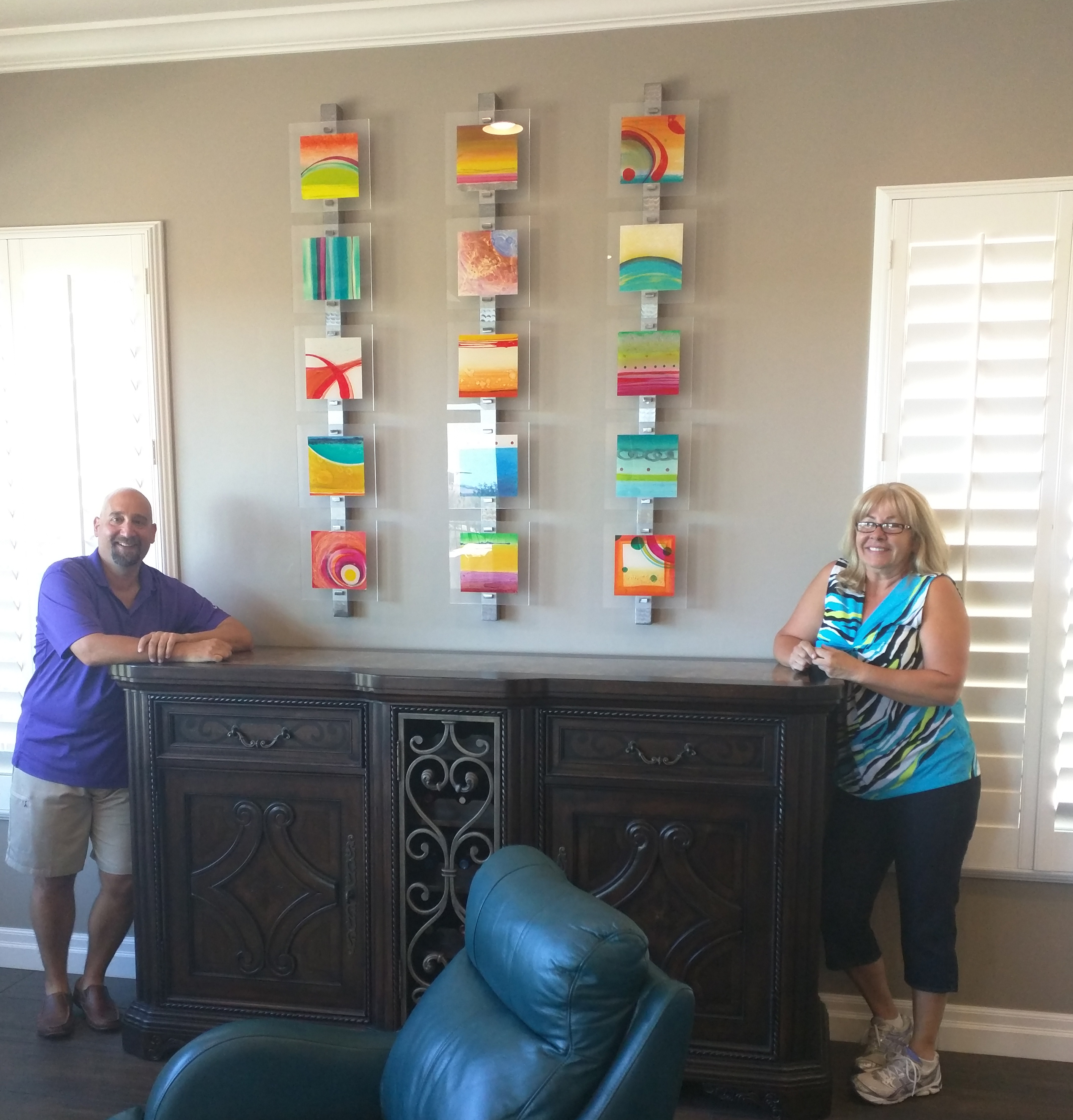 (in photo: clients with 3 Geometry Totems by Linza)

On a Monday in May, I happened to be alone in the gallery. This isn’t usually the case, but my gallery director, Elaine, was out of town, and with the with the work schedule that week, it turned out that I was flying solo. This didn’t present a big problem because we were coming to the end of our spring busy season, and traffic had already begun to slow down.

I arrived at the gallery around 7:40 a.m., which is pretty typical, and began tackling a couple of big projects. After a while, I heard a rattling at the front door, and realized it was after ten and I hadn’t yet unlocked the front doors (evidence that perhaps I shouldn’t be allowed to fly solo!). I rushed to the front door just as a couple was walking away. I quickly unlocked the door and beckoned them back. It turned out that the had driven to the gallery from an outlying suburb some 35 miles away, on the recommendation of a friend. They had just purchased a new home and were looking for art.

I began showing them around the gallery and telling them about the artwork on display. We had a great visit and they found the work of a particular artist that really spoke to them. I carefully began working toward a close. After they had selected three pieces they particularly liked, the wife said, “This is our first time in Scottsdale, we want to visit a few other galleries before we make any decisions.”

I understand this desire, and Xanadu was their first visit. I used a soft-close to get them to put the three pieces they liked on hold, and they told me they would be back after spending some time on the street looking at art. I also gave them a recommendation for lunch.

One never knows what’s going to happen in this scenario. After all, I’m on a street with over 50 other galleries – there’s always the possibility that the client might find something they like better than what they’ve seen in my gallery. Fortunately, I don’t have to worry about this for several reasons. First, my highest priority is making sure that clients find the perfect piece of art for their home, even if this means that they find it in another gallery. Sure, it’s hard not to feel a bit envious when that happens, but I know that this attitude and approach creates positive energy and good karma. I’ve sent clients to a specific gallery before when I knew that the gallery had exactly what the client was seeking.

The second reason I didn’t worry too much in this particular case was that the pieces the couple was interested in are very unique and striking. This art would compete extremely well with anything else the couple was likely to see in another gallery. I could tell that the couple were in love with the artist’s work.

The third reason I didn’t worry was because it was Monday morning, and I have a competitive advantage on Monday mornings because a large number of galleries on Main Street in Scottsdale (where my gallery is located) are closed on Mondays!

Sure enough, several hours later the couple came back. “Were you worried we wouldn’t return?” the wife asked.

They laughed, and then said, “We saw some good art, but nothing compares to these. We’ll take them!”

As I began writing up the sale, the wife commented to me, “A lot of the galleries were closed. I guess it’s worth being open on Mondays for you!”

I agreed as I ran her credit card. Definitely worth it.

Because the couple was driving a small sports car, I told them I would be happy to deliver and install the pieces the next morning. They were thrilled.

I asked if I could bring out any other pieces so they could see how they would look in the new home. There were several pieces by the same artist they had just purchased that they liked, but they weren’t sure they wanted to have more work by the same artist.

Several hours later, however, the husband called  and said they did want me to bring the additional pieces out when I came – if I was driving all that way, I might as well.

Not bad for a Monday morning!

The day wasn’t over, however. Mid-afternoon another couple walked through the front door. After welcoming them I learned that they were collectors who had purchased a number of pieces from us previously. They were just in town for the day and were interested in adding another sculpture to their collection. It turned out we had just the right piece, a life-size child sitting in a rocking chair, reading a book. We negotiated a bit on the price, and I wrote up the sale and made arrangements to have the piece delivered to their home in the Midwest. As soon as we finished they were on their way out the door to head to the airport.

Tuesday morning I drove out to the first clients’ home, a beautiful house on a golf course, and installed the pieces they had purchased. I then brought in the additional pieces the husband had called to request. We found the perfect spot for them. “Would you like to try them?” I asked.

“Great, I’ll hang them!” I said. When I was finished, the husband gave me a credit card, which I processed on my phone, and I was off.

As I drove back to the gallery, I couldn’t help but think about how right the wife was when she said being open on Monday was worthwhile. This particular Monday resulted in the sale of 6 paintings and a major sculpture.

To be clear, not every Monday is nearly this successful in terms of sales – in fact, many Mondays don’t result in any sales – but this experience points to several principles I believe in:

1. Be there! I remember an art dealer in Jackson Hole once telling me “You can’t sell if you’re not open.” There’s a lot of value in working harder and smarter, but in the retail business there’s also value in simply having your doors open. If there’s a chance a client is going to walk by, it’s in my best interest to be open and ready for business.

Obviously there are limits to this rule – I’m not open 24/7 – the gallery closes in the evening, and, in fact, I’m closed on Sundays and holidays. I’ve been in business since 2001 and I’ve experimented extensively with every combination of open hours, and what I’ve found is that if more than 50% of the galleries on the street are going to be open, I want to be open as well. Any fewer than that and I’ve learned that it doesn’t pay to be open. Hence our closing on Sundays and holidays.

One of my artists has a gallery in Prescott, AZ, a small, touristy town, and they have experimented and learned that being open on Thanksgiving Day is worthwhile for them. They end up being one of the only businesses open, and it turns out that a lot of tourists in the area have nothing else to do.

2. Provide an exceptional level of service. I mentioned my willingness to send clients to other galleries – this idea of holding your client’s best interest as your highest priority helps you build credibility. Additionally, offering to install the artwork in my clients’ home gave me the opportunity to sell three additional pieces (consequently, those three pieces were worth more than the initial three I sold to the clients!)

So how does this apply to you?

If you own a gallery, I would encourage you to push your hours to the max, to be open as much as possible. You never know when your next great collector is going to walk through the door. I do understand that being open comes with a cost – there are employees and utilities to be paid, so you want to balance your hours against the cost of those hours. Better to start with too many and work your way back, however, than to start with too few. If your are experimenting with new hours, I’ve found you have to commit to at least six month on those new hours to determine how well they will work for you.

If you are an artist participating in a show or festival, stick out the full length of the show. I know it’s a huge temptation to pack it in early, especially if the show has been poorly attended, but I can’t tell you how many times we’ve had a client come into the gallery right as we were closing and end up making a purchase. If you’ve gone to all the effort to get to the show and set up your space, you should try to squeeze every moment of possible exposure out of it. I know that most of those moments are going to be fruitless, but you just never know when a big buyer is going to show up. Over time, the cumulative effect of being more available is going to add up.

Additionally, I make the most of my time by making sure that I always have something to work on in the lulls between clients. I try never to be sitting idly by waiting for a customer to come in. I’ll work on marketing, or on following up with customers, or on any of the other projects I have going at any given time. Not only does this allow me to get a lot done, it keeps me alert and primed so that I’m ready for the next customer.

What do you do to maximize the exposure of your art? How have your efforts resulted in successes? What do you feel you could be doing better? Share your thoughts and experiences in the comments below.