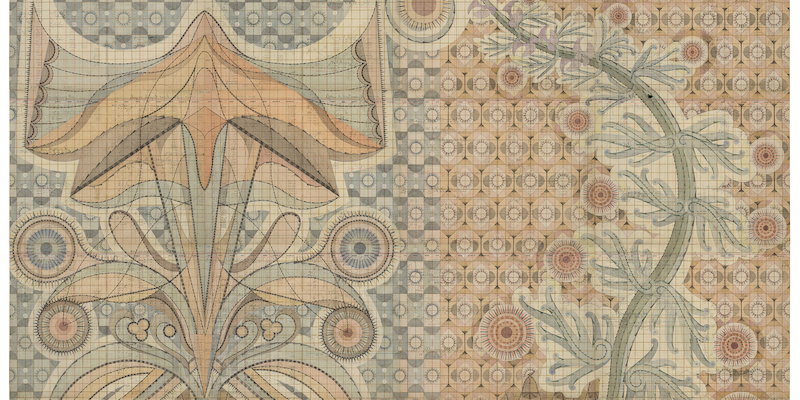 With “In Resonance,” Louise Despont continues to enmesh the botanical and the spiritual through meticulous, meditative drawings elegantly rendered with graphite and colored pencil in her signature pastel tones. The show’s centerpiece, the massive Aconite, 2021, hangs on a wall of its own between two of the gallery’s Corinthian columns. A poisonous plant that grows in rocky habitats, the aconite—also known as wolf’s bane—is widely used for medicinal purposes, even though scientific evidence has yet to confirm its exact healing properties. Delicately drawn hemispheric forms repeat like tiles over the grid of old ledger pages. Smudgy text from the paper’s previous life is visible in patches. On the left of the composition is a delicate organic blossom held together by ridged vines, while to the right, a bulbous stalk holds a sunlike kernel in its curling head.

On the adjacent wall, tender-looking bamboo is molded by hand and stitched into shapes that resemble flower diagrams, or even the human torso. Placed on naturally dyed cotton fabric, the form is reminiscent of Indigenous string instruments and bamboo craft techniques, particularly from South and South East Asia. The work is titled Gelsemium, 2020, after another poisonous flowering plant found in Asia and North America. Unsafe when taken by mouth, the plant is used to treat anxiety and loneliness, as well as to alleviate breathing difficulties, perhaps a nod to these times of contagion. Despont’s selection of flora is, as ever, precise and loaded with meaning. In this series,  the distance between fear and healing can only be overcome with an act of surrender, courage, and belief.

Previous articleAbakans – The New Humans of Magdalena Abakanowicz
Next articleRoss Craig – ‘There’s a sort of affirmation when someone picks your image. It’s not just me that likes it, it’s other people’