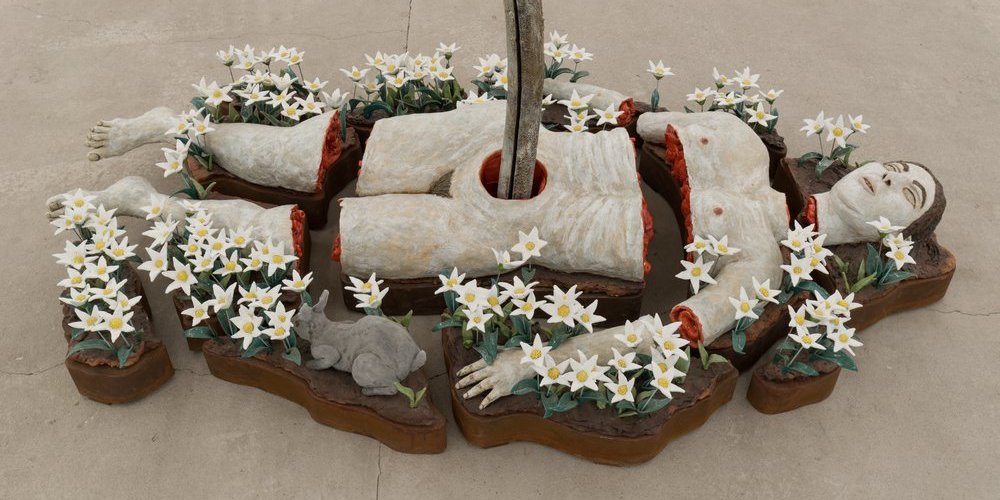 The fecund imagination of sculptor Kathy Ruttenberg is a world unto itself, populated with forest creatures and fairytale figures that hint at Jungian archetypes, the divine feminine, and even early film animation. In her work, ceramic flowers have faces, a stamen becomes a penis—or a vine an umbilical cord—while women’s bodies merge inextricably with woods and ponds, animals, and the soil itself as they nurse fox cubs. In The Wind Blew and Changed Everything, 2021, a woman leaning pensively against a tree is surrounded by a menacing spider, mice, an owl, and a snake. Above her, held aloft by branches, a sylph-like form cast from translucent fiberglass looms. Perhaps it is the protagonist’s soul or some other life force. The scale of the mostly stoneware work is large and the execution exquisite, down to its myriad details, such as the way the woman’s hair seemingly catches the breeze, the autumnal patina of the copper leaves, and the tiny lights that illuminate the spirit essence.

Ruttenberg’s art calls to mind the works of other brilliant eccentric misfits, including Eugene von Bruenchenhein, Joseph Cornell, Niki de Saint Phalle, and Alison Saar. She shares with these artists a seraphic dedication to a personal, idiosyncratic, and deeply authentic impulse, making objects tuned to a subconscious voice that begs, cajoles, and even threatens for outward expression.  In The Moment After, 2008, a severed female body—her glazed-clay skin pallid, her insides carefully and viscerally rendered—lies on a bed of pretty flowers as a rabbit sits by her side and a blooming tree grows from her midsection. In A Little Birdie Told Me, 2014, a hole is cut into a woman’s skirt to reveal a serene tableau with a small deer and other fauna among trees. She, however, is attached to a vine-like leash held by a man with the head of stag. We might be tempted to interpret Ruttenberg’s sculpture—with all of its narrative symbolism and implications of sex and death, love and loss, decay and renewal—as one would a dream or a nightmare. But it’s just as satisfying to simply disappear into the artist’s magical, hallucinatory settings.