Critic Calvin Tomkins on Vija Celmins (And Her Cat) 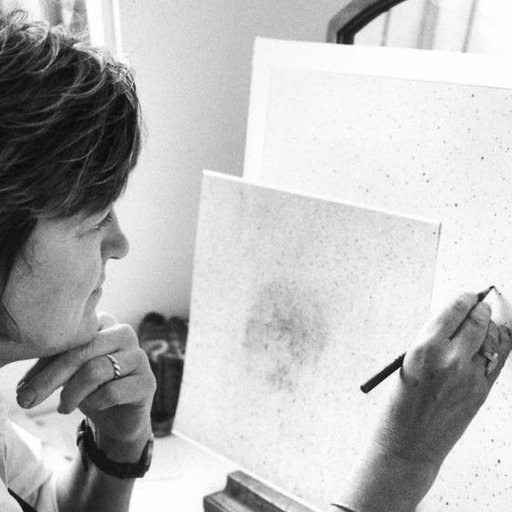 If you care about art, you care about Calvin Tomkins, the legendary journalist and author whose chronicles of the Manhattan art scene became a blueprint for contemporary art criticism itself. In 1959, his interview of Marcel Duchamp for Newsweek put his writing on the map; he went on to become a New Yorker staple, profiling dozens of the era’s most interesting artists from Jasper Johns to Cindy Sherman and beyond.

Phaidon is closing out the year by releasing a much-anticipated anthology of Tompkin’s work, titled The Lives of Artists, a definitive six-volume set featuring 82 of his most significant pieces from 1962 to present day. Combining the rigor of an art historian with the incisive charm of a rock star interviewer, Tompkins provides unparalleled insight into the lives and practices of our generation’s artistic pioneers.

In the following 2019 excerpt from The Lives of Artists, Tomkins joins Vija Celmins, the undisputed queen of graphite, in her Sag Harbor studio to learn more about her process, philosophy, and enormous, ill-behaved cat, Raymond. Celmins, who is currently the subject of an unmissable eponymous retrospective at the Met Breuer, has made her name through painstaking investigations of surface that animate historical archives, imbuing geopolitics with felt, poetic specificity. Be sure to visit the Met Breur before the exhibition closes January 12th, add The Lives of Artists to your holiday wishlist, and browse Celmins’ work available on Artspace.

Celmins owns a house in Sag Harbor, on the eastern end of Long Island, a two-bedroom cottage that she bought in 1997 with money from a MacArthur Fellowship. She drives out there nearly every Thursday, from the modest Manhattan loft she owns in SoHo, and returns on Sunday. Celmins could easily afford grander living quarters. After a highly successful show in 2017, she hired an architect and a contractor to carry out a major renovation of the Long Island studio she bought five years ago, a few miles from Sag Harbor. When it’s finished, her plan is to live as well as work there, but she won’t sell the house in town. Celmins lives alone, with a large, aggressively friendly cat named Raymond (after Raymond Carver). “Raymond is my husband,” she said, when my wife and I visited her in Sag Harbor last fall. “He is a master of knocking things over.”

A stuffed Canada goose hangs by a wire from the ceiling of her sun porch, and a diorama of other avian species, including an owl, occupies a large, glass-fronted box on a table in the living room. Celmins has been a bird-watcher since the nineteen-seventies. Her furniture is all second-hand, she said, most of it acquired in local yard sales. (“This chair was five dollars.”) When my wife aimed her iPhone at the tiny guest room and bath just off the living room, Celmins said, “You’re taking pictures of my toilet?” Before we arrived, she had gone to Loaves & Fishes, a high-end food store in the nearby village of Sagaponack, and brought back deviled eggs, croissants, sweet buns, and other pastries, which were of great interest to Raymond. “Stop!” she ordered, loudly but ineffectually. “Go away.” Celmins has two part-time studio assistants, Naho Taruishi and Jamisen Ogg, both artists. In New York, where Celmins’s studio is part of her loft, Ogg used to mark temporary grids on her canvases with lengths of string, as a guide, but Raymond learned how to pull of the strings, so now they are testing other methods. Keeping Raymond out of the studio is not an option.

Celmins took us, in her twelve-year-old Toyota, to see the studio she is renovating. “It used to be a potato barn,” she said. The studio part of it has been extended, with high, vaulted ceilings and a skylight. To the right are a combined living and dining room, several bedrooms, and a three-story tower that was one of Celmins’s priorities in her discussions with the architect. We climbed the three flights and walked out on a small deck that overlooks winter meadows and farmland stretching to the Atlantic Ocean. A few horses grazed near a big, fenced-in rectangle of grass—in the summer, Celmins explained, this is a polo field. Being up here made her very excited, like a child with a new toy. She began laughing and jumping up and down in sheer exuberance.

We drove back to Sag Harbor, where Celmins cooked a substantial lunch of fried local flounder, new potatoes, green beans, and asparagus. Raymond kept getting up on the kitchen counter. Celmins would gather him in both arms and drop him, from shoulder height, to the floor. Two minutes later, he’d be back. Raymond is a big cat, and being dropped didn’t seem to bother him in the least. (A week or so later, when Celmins was making dinner in her New York kitchen, the same pattern was repeated. She finally got annoyed and dropped Raymond with considerable force. “I could get another cat,” she warned him. “Has that occured to you?”)

After lunch, I noticed an elaborate spider web under the seat of the five-dollar chair, with a spider in residence. It turned out that most of the chairs and tables had webs under them, some inhabited and others vacant. I thought maybe Celmin’s spider web drawings in the nineties had come out of a similar visitation, but no. “They came from a little book I found, from the forties, of the different kinds of webs spiders make,” Celmins explained. “I was going through the book, and I realized that the webs described the surface, which was what I want to do.” (Celmin’s explanations can be Delphic. I think what she means by “described the surface”—the same phrase she used about her ocean drawings—is that the image and its support, paper or canvas, are indistinguishable. But I may be wrong.) Her spider web drawings are in charcoal, not pencil, and the images are created by erasing. “I put down a charcoal ground, rub it in with my hands, and the rest is done with erasers,” she said. “It’s just dust, really. I even bought an electric eraser. But I should have dropped this image earlier, you know? It was getting too relational, too active. Some people feel they’re realistic, but the details were just to get you to explore the surface.”

Celmins was driving back to the city that evening, and we went with her in the Toyota. It was pitch-dark, and raining. Raymond rode in the front seat, in a cat carrier that Celmins didn’t bother to close, so he kept getting out. He visited us in the back, but he was more interested in climbing up on the dashboard and walking around there, his tail lashing back and forth between Celmins’s face and the windshield.