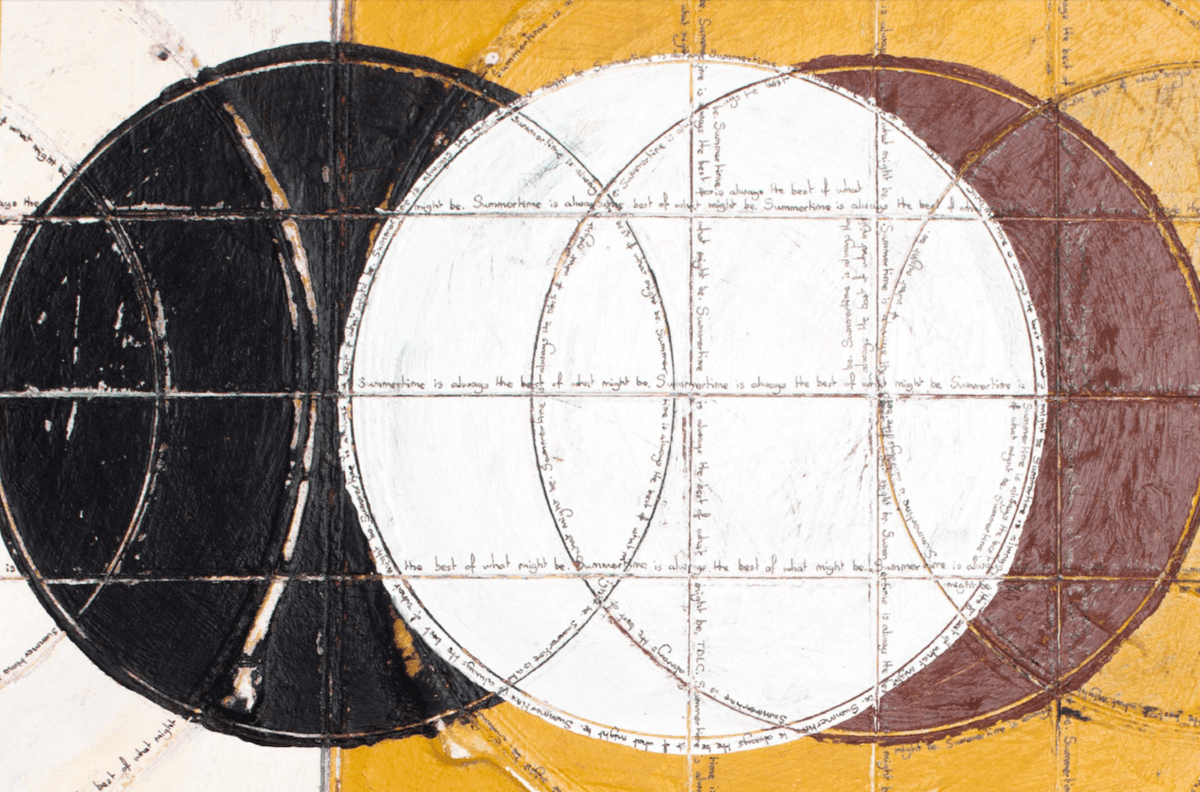 Sabrina Brouwers and Taya De La Cruz are both painters, but neither artist limits herself to the standard set of tools for making their work.

Sabrina Brouwers and Taya De La Cruz are both painters, but neither artist limits herself to the standard set of tools for making their work. Brouwers’ layered, semi-geometric abstract paintings are dominated by overlapping grids and circles, rendered using rulers and compasses. De La Cruz employs medical syringes to dispense tiny blobs of paint, creating patterns which she then adorns with even smaller words and letters in ink. Both artists deal with the contrast between uniformity and chaos, calculation and chance. For Brouwers, this manifests itself in the form of perfect circles filled with imperfect brushstrokes; for De La Cruz, it is in the contrast between coloured spots administered using medical tools and the artist’s own handwriting.

Drawn together partly by their shared interest in this tension – on a Zoom call, De La Cruz describes Brouwers’ paintings as “a really beautiful hybrid of controlled and wild” – the two have collaborated on a series of four mixed-media paintings. Named after the four seasons, the modestly and uniformly-sized works on panel combine Brouwers’ networks of lines and curves with De La Cruz’s writing. In Spring, “To see things in the seed, that is genius,” a quote generally attributed to Chinese philosopher Laozi, is repeated around the circumferences of a series of intersecting circles of varying sizes sitting on (and sometimes jumping off of) a chilly light blue and off-white grid. Autumn’s outlook is less spritely. The grid remains, as do the obedient and disobedient circles, but there are now shades of ochre yellow and burgundy and De La Cruz’s handwriting narrates as “everything gets ready to rest”. When I spoke with the artists, I learned from De La Cruz that the words for Autumn were adapted from a more grim quote from author Patrick Rothfuss: “In autumn, everything is tired and ready to die”. But, of course, everything doesn’t die. autumn ends, and winter comes. And then spring, then summer, then another autumn: a cycle.

The artists were thinking of cycles when they decided to create this series together: the menstrual cycle, the lunar cycle, the seasons. Like Brouwers’ circles, these cycles push onwards and outwards before returning to their beginnings. “The base grid is a subtle reference to the calendar year,” Brouwers tells me, introducing a tension between a cyclical understanding of time and the rigid, linear understanding one that we might be used to – the kind that has us crossing off days one by one. This tension seems in line with the duality that both artists deal with in their own practice: there are free-flowing cycles and circles, and there is regimented, linear calendar time. To me, the paintings feel like a rejection of the latter. The calendar-like grids are embellished with a chaotic system of circles that wax, wane, grow, shrink, and ultimately return to their beginnings. Each painting – each season – brings with it a new feeling, it also suggests that things will come back around. Even in Autumn, we see small patches of Spring’s blue, reminding us that it isn’t far away.

On the surface, the paintings are about the optimism of spring, the excitement of summer, the tiredness of autumn and the bleakness of winter. Really, they are an homage to the cycles that surround us and those that are within us. “It all sort of came back to […] looking at it as more of a life cycle,” De La Cruz explains to me. With this in mind, looking at Spring, Summer, Autumn and Winter, I feel calm in the knowledge that – In the world, in the body and, ultimately, in my lifetime – return is inevitable.

Curator at Large: Exhibitions to see in May

Discover our curator’s top exhibitions to