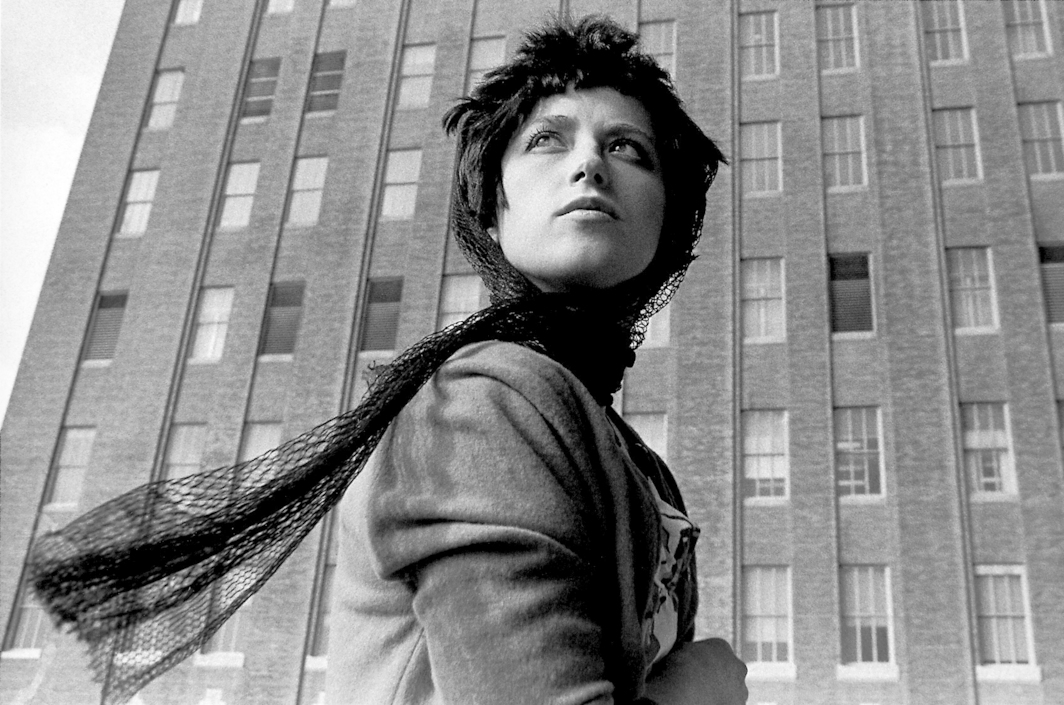 More than forty years ago, Cindy Sherman debuted “Cindy Sherman,” the polymorphous persona that, since then, has been the artist’s primary subject: a reflection not only of herself, but also of mass culture’s often strange and troubling depictions of women as a whole. The seventy photographs from Sherman’s 1977–80 “Untitled Film Stills” series are part of an exhibition at Hauser & Wirth that examines some of her earliest forays into self-portraiture. Of course, as familiar as these works—and the cinematic tropes they mine—have become, they never fail to unsettle. Take Untitled Film Still #7, 1978, in which the artist transforms herself into a louche Las Vegas type, leaning awkwardly out of a sliding glass door dressed in a white slip holding a cocktail glass and adjusting her garter belt; or Untitled Film Still #58, 1980, where she’s a resolute-looking heroine in a black wig and scarf, standing before a high-rise while staring fearlessly out of the picture, beyond the viewer’s gaze; and Untitled Film Still #53, 1980, in which Sherman, disguised as an elegantly made-up and coiffed character resembling Princess Diana, peers disconcertingly to her left. The shape of the glass torch lamp behind her humorously echoes her round hairstyle, while the background light forces her face into a veil of shadow.

On the one hand, Sherman’s pictures reside in the playacting tradition of great Victorian photographer Julia Margaret Cameron; in the revolutionary identity-shifting oeuvre of Surrealist Lucy Renee Mathilde Schwob (aka Claude Cahun), and even the searing confessional self-portraiture of Francesca Woodman. On the other hand, Sherman’s groundbreaking significance truly emanates from how her work subverts the premise that photographs can be trusted as sources of truth. The idea that a photo is rarely what it says it is because it represents a conceit and not a certainty was radical decades ago (and exquisitely articulated by Susan Sontag in On Photography [1977]). Some people who saw Sherman’s works when they were first exhibited claimed they actually knew the films the images were ostensibly based on—but that was her art playing its clever games on their highly mediated memories.

Sherman’s “Stills,” with their onion-like layers of meaning, questioned the veracity of even the most compelling and honest pictures being made at the time by street-photography luminaries such as Lee Friedlander and Garry Winogrand. These small, rich, and surprisingly demure prints (all eight by ten inches, like old Hollywood headshots) were originally hung in downtown Manhattan galleries while the perfectly produced, overbearing billboard-size portraits and still lifes of Richard Avedon and Irving Penn—seductive images informed by the exaggerations and lies inherent in advertising and fashion—were being displayed uptown. Today, Sherman’s early works seem as important as ever, demanding of us much more than the glossy fictions she makes fun of, insisting that we look carefully at our sources and read between the lines.