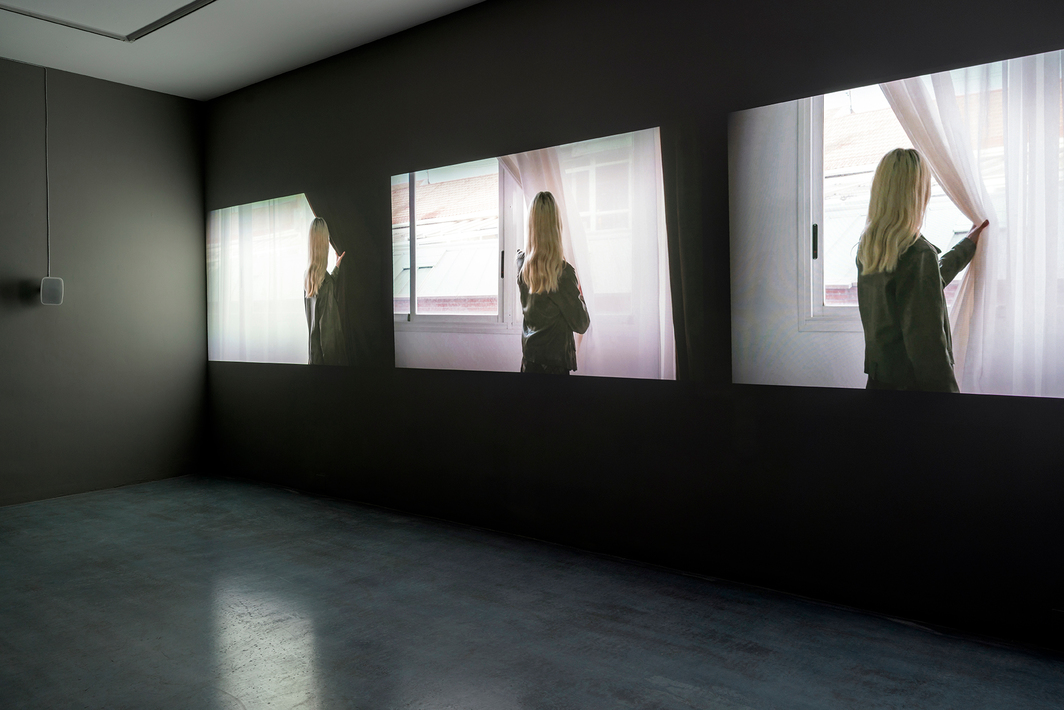 In their latest video installation, A Movie Without Any Intention, the collective Cabello/Carceller pays homage to Chantal Akerman’s veiled autobiographical film Les rendez-vous d’Anna (1978). The duo take as a starting point one short scene in which the protagonist walks to the window of a generic-looking hotel room and pulls back a curtain to look out over a city. Akerman traps her audience in a double denial of visual expectations. She captures the character with her back to the camera, withholding both the expected view of Anna’s face and the subjective shot that would have shown the landscape as seen by her eyes.

At Galería Elba Benítez, after drawing back a very theatrical and heavy brown velvet curtain of almost Lynchian foreboding, we face three large screens playing Cabello/Carceller’s reenactment of the scene: A figure with long blonde hair stands before a window and draws back the very same portentous drape to reveal a sheer curtain that, due to the opacity of the light diffusing through the fabric, occludes of our view of the scene beyond. Her movement is repeated in nonsynchronous loops on each of the screens, creating a hypnotic rhythm underlined by the whispering sound of the velvet being drawn back and forth, reminiscent of waves lapping against a beach. At the end, the protagonist, a transgender person, turns to look at us with a serious, perhaps defiant, expression.

The work is consistent with Cabello/Carceller’s previous recreations of classic cinematographic images that explore the construction of gender. “What interested us most about [Akerman´s] seemingly insignificant scene,” the artists write, “was its ability to evoke the life experience of those of us who, due to different circumstances, do not fit into the hegemonic model of coexistence.” Their reinterpretation here results in a powerful and poetic meditation on distance, alienation, and the politics of vision: A new idea of solidarity across difference lies before our gaze; some of us are close enough to see it, while others are blinded by its brilliance.

Previous articleWhat is the Scariest Thing you Face as an Artist? | Overcoming Your Fears – RedDotBlog
Next articleArtist Spotlight: Lisa Golightly