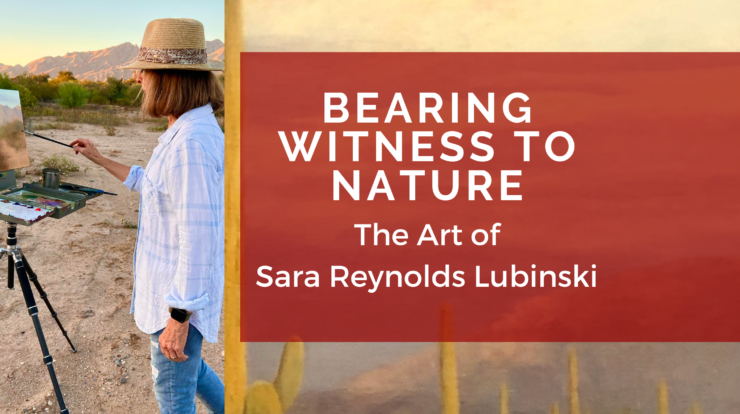 They say that timing is everything. When most people hear that, they smile and nod, remembering a specific event in their life that confirmed it as a powerful truth. Occasionally, when Sara Reynolds Lubinski hears it, she starts wondering if she was born in the right century.

Sara has a deep and complex relationship with nature. She is an artist and a scientist, and her role models, creative spirit, and personal goals come from both disciplines and a diversity of others. The 19th-century painters of the Hudson River School and the Tonalist movement influenced her preference for painting landscapes. Scientists and conservationists fostered her curiosity, love of learning, and appreciation for all that nature provides. Philosophers of all ages have shaped her values about the ways humans should interact with nature. Over her lifetime, these collective influences have transformed her from a quiet observer to someone who can and does bear witness, mainly through her rare atmospheric painting style.

Occasionally, she still dreams about sitting down to lunch and posing questions about life and art to the Buddha, George Inness, Aldo Leopold, Henry David Thoreau, and Sara Plummer Lemmon (the botanist and namesake of Mount Lemmon near Tucson, Arizona). Cross-cutting thoughts and experiences dominate those that manifest in her paintings.

It all started on the rambling property where she grew up on the edge of Lincoln, Nebraska, and the nearby small town where generations of her mother’s family lived. Sara remembers exploring the gardens and woods, roaming the fields and remnant prairies collecting bugs, learning the songs of local birds, and crawling under shrubs to watch and listen to whatever critter passed by.

She started drawing early, selecting things she was most fond of – animals, plants, the sky. Her drawings drew the attention of her elementary school teachers, and she was delighted to be pulled away from her school desk to paint seasonal and holiday murals. The teachers sent apologetic notes to her mother for her paint-splashed clothes.

Her clearest childhood memories, family trips across the plains to Colorado to visit her father’s relatives and stay in mountain cabins, forecast her future attraction to landscapes. During the long drives across Nebraska and eastern Colorado, she was mesmerized by the vast prairie skies and the storms that rolled across the plains. “To this day,” Sara reflects, “I feel a deep connection to the Great Plains, to those long views, rolling hills, far-off horizons, and waving fields of grasses. It is still a place where my breath grows deep and easy.”

Her parents took her, at age eight, to museums and theater performances in New York City. Her life-long attraction to the formal arts was set from that time forward.

Sara inherited her father’s temperament, introverted and pensive with a keen sense of observation. Together they explored fields and forests and sat on the screen porch after dark, listening for the calls of owls or the howls of coyotes.

As a young teenager, a move to the Chicago area introduced Sara to the Art Institute of Chicago, where her mother signed her up for summer classes. After classes, she would wander the galleries for hours, enchanted by the Impressionist and French Barbizon painters. She was attracted to the works of Monet, Corot, Constable, and Van Gogh, as well as Thomas Cole, the Luminists and Tonalists, especially John Kensett, James Whistler, and George Inness with his moody, mysterious landscapes. It was there that any lingering doubt was erased. She knew she wanted to be a painter.

She majored in art during her first two years at the University of Wisconsin. But her concern about environmental issues fostered a new interest in science. The works of Rachel Carson, Aldo Leopold, and others led her to study biology.

With an eye towards future employment, she changed her major from art to biology, where she eventually earned a master’s degree with an emphasis on botany and ecology, but her artistic interests and skills were never far away. She worked as a graphic artist in the university’s media department, creating teaching materials, especially for the biology department, where she became the go-to artist for anatomical diagrams and textbook drawings.

She developed a deep respect and friendship with her major professor, botanizing with him for years after graduating. When he passed away in 2016, she created an exhibition of paintings based on the native plants she’d learned from his tutelage. The exhibit packed the gallery with his colleagues, her former biology and art professors, and students from several decades.

In 1989, Sara accepted a position with the U. S. Fish and Wildlife Service on the Upper Mississippi River, monitoring and researching aquatic plants. The job required traveling the river from Minnesota to southern Illinois. She spent days on the river in a small, flat-bottomed boat, recording plant locations and referencing aerial photography to create maps valued by river managers. The beauty of the river, especially its backwaters and side channels, lingered. So much so that her first solo exhibit, “Backwaters and Side Channels,” was based on these unique habitats, with paintings often cast in evening light or with the full moon rising over calm waters.

In 1996, she began describing, classifying, and mapping vegetation for national parks.

Sara loved investigating plant geography and ecology and hiking to “ground truth” aerial photography in remote areas. “It was challenging work, physically and mentally,” she notes, “and often thrilling with sightings of grizzly bears, wolves, and moose. The beauty of the parks was astounding, and I often thought about how lucky I was to experience such amazing places on such an intimate level. Yet I was saddened to learn how the impacts of humans were altering the delicate ecology of even the remotest regions.”

Glacier National Park rekindled her long-buried dream of someday being a painter. “I began mixing colors in my head to match the mountains and lakes,” Sara says, “and from that moment on, the desire and need to paint became stronger. A couple of years later, finally acknowledging it was time for a change, I made the giant leap to leave government work. I wanted to put my full attention toward painting. However, I continued to work part-time while relearning the skills I needed.”

The shift to art might seem a dramatic departure from a solid and predictable scientific career, but Sara realized both careers were based on what she found important and beautiful. She found solace in the kindred souls of current and past naturalists, painters, and philosophers she admired. A quote by Einstein seemed to rise from her own heart:

“The most beautiful thing we can experience is the mysterious. It is source of all art and science. Whoever does not know it and can no longer wonder, no longer marvel, is as good as dead, and his eyes are dimmed.”
–Albert Einstein, 1931

Sara spent the next decade learning how to become a professional artist, taking plein air workshops with Marc Hanson in Minnesota and Lorenzo Chavez in Arizona, an art business workshop through Xanadu Gallery of Phoenix, and starting her career through regional art fairs and exhibits. She studied with Deborah Paris, and through her, Sara learned to weave her love of science and natural history with the moods and techniques of nineteenth-century Tonalist painters. Like the Tonalists of that century, her work evolved to scenes of quietude, with a preference for the subdued hours of twilight and mysteries of nighttime and moonlight, devoid of human presence, representing places of solace. “I realized,” Sara recalls, “a need to have an overall sense of peace in my paintings, contemplative and reflective, metaphoric of my relationship with the landscape. I wanted my paintings to extoll the beauty of Earth with an underlying sense of awe and connectedness. It is this deeper connection I hope to bring to others.”

Beyond an artist’s day-to-day work, Sara continues searching for deeper meaning along her artistic and life path. A quote from Wendell Berry inspired what Sara calls “precepts to live by” – embracing solitude, seeking mindfulness and awareness, remaining open to beauty and mystery, living simply and with a thoughtful rhythm to each day.

“True solitude is found in the wild places, where one is without human obligation. One’s inner voices become audible. One feels the attraction of one’s most intimate sources. In consequence, one responds more clearly to other lives.”

In 2014, Sara began a two-year solo exhibit tour throughout art museums and galleries along the Mississippi River in Iowa, Minnesota, and Wisconsin. Once again, this adventure combined her passions for art and science. “River Sojourn: A Painter’s Portfolio of the Mississippi River Blufflands,” consisted of more than seventy paintings, revealing the special habitats of a geological region called the Driftless Area. The exhibit convinced her that her work had the powerful ability to connect people with nature and inspire concern for the environment. KSMQ TV, a regional PBS station in Minnesota, felt her work was essential and compelling enough to create a half-hour documentary about the exhibit. It was shown at her public events and aired often on Minnesota PBS stations.

As much as she loved the Upper Mississippi River region and was thriving as an artist there, the Great Plains and the West of her childhood beckoned. While visiting family that had gravitated West earlier, she, too, fell in love with the region, especially the mountain ranges and iconic desert plants. She attended plein-air workshops with Lorenzo Chavez and explored the region with local botanists. In late 2018, following her husband’s retirement from the U.S. Geological Survey, they decided to leave the Upper Midwest for Tucson, driven by Sara’s desire to paint the desert landscape, be closer to family, and escape the long Minnesota winters.

As a new resident of the Southwest, Sara is thrilled to be exploring the mountain and desert region that inspire her continuing effort to connect people to nature. In 2020, she was selected as an artist-in-residence at the Petrified Forest National Park. Two of her paintings from that experience are now part of the park’s permanent collection.

In the Tucson region, she finds inspiration in the surrounding mountains, desert washes, and impressive evening skies. “It is the beauty I see in nature that compels me to paint,” Sara confirms, “but I also realize my personal experiences, knowledge, and insights seep into my work.

Painting is a way of expressing what I find beautiful, but beyond that, it also helps me bear witness to our relationship with the planet and what that means. My paintings have always been a way of bringing awareness about nature to others. I strive to reveal and magnify how nature comforts and supports all of us and how we are hardwired to respond to it. We need to take the time to be aware of and accept our deep connections and responsibilities to the planet and each other.” She hopes that her emotional connections to nature find their way through her paintings to the hearts of her viewers.

We are lucky she was born in the right century.

From the Woods to the Canvas: The Art of Leanne Hanson – RedDotBlog

Leanne Hanson has discovered that one of the mos

The Calculus of Creativity: The Mixed Media Sculpture of James Woronow – RedDotBlog

James Woronow’s art is all about geometry and cl