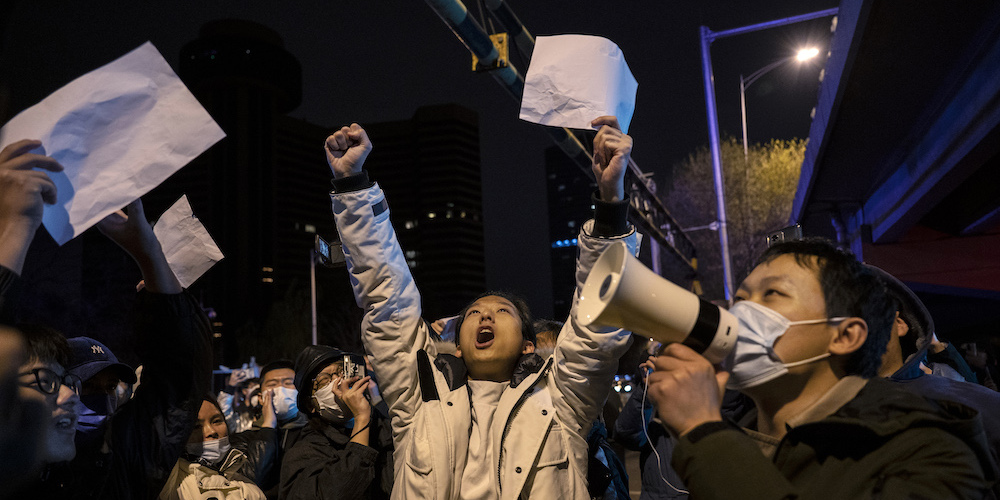 Artists across China are playing a major role in the so-called A4Revolution, a nationwide uprising, sparked by Covid-19 measures, that is the largest China has seen since 1989 and the biggest one to date under president Xi Jinping, who has overseen a harsh crackdown on public dissent since his rise in 2012. The flash point of the revolt, which follows months of economic pain caused by China’s attempts to eradicate Covid by imposing severe restrictions, is a November 24 fire in an apartment block in Urumqui, Xinjiang. Ten people died in the blaze after Covid-control measures are said to have prevented their quick egress from the building and slowed the arrival of fire crews.

During the past weekend, as crowds of demonstrators thronged streets, parks, and campuses across China, students protested with graffiti and art. Among the art schools whose students demonstrated en masse were the China Academy of Art in Hangzhou, the Guangzhou Academy of Fine Arts, Hubei Institute of Fine Arts, Lu Xun Academy of Fine Arts in Shenyang, Tianjin Academy of Fine Arts, and Xi’an Academy of Fine Arts. In one notable instance, students at Beijing’s Central Academy of Fine Arts pasted pieces of paper bearing the Chinese characters for “freedom” to a statue. Protest art created by Chinese artists circulated online, often promulgated on social media by those outside China. Artnet News noted that @whyyoutouzhele, a Twitter account operated by an anonymous Chinese artist living outside the country, has been aggregating and presenting footage and reports from across China, while Australian artist Badiucao has been doing the same, additionally creating and circulating his own art supporting the revolution. Their actions recalling the Hong Kong protests of 2020, protesters in multiple cities have marched bearing sheets of blank paper, their eloquent emptiness a response to the implementation of a national security law forbidding banners and signs whose messages are critical of the government.

The 1989 protests, spurred by political corruption and economic instability, led to the government massacre of students and protesters in Tiananmen Square, which was followed by a loss of world status for China both politically and economically, as the country was viewed as a pariah state. The Chinese government continues to suppress public mention of the protests, as recently evidenced by Hong Kong contemporary art museum M+’s removal last spring of Wang Xingwei’s 2001 painting New Beijing, depicting two heart-shot penguins widely believed to represent the pair of injured Tiananmen Square protesters shown in a 1989 photo by Liu Heung Shing.

Speaking with Reuters from his home in Portugal, Chinese dissident artist Ai Wewei expressed doubt that the A4 demonstrations would continue, noting that though democratic governments around the world vocally support the protesters’ efforts, these same countries have a vested economic interest in remaining friendly with China. Additionally, he says, the protest movement remains without a leader because China “for seventy years . . . cleaned out any people, intellectual or media, who can raise a question.”