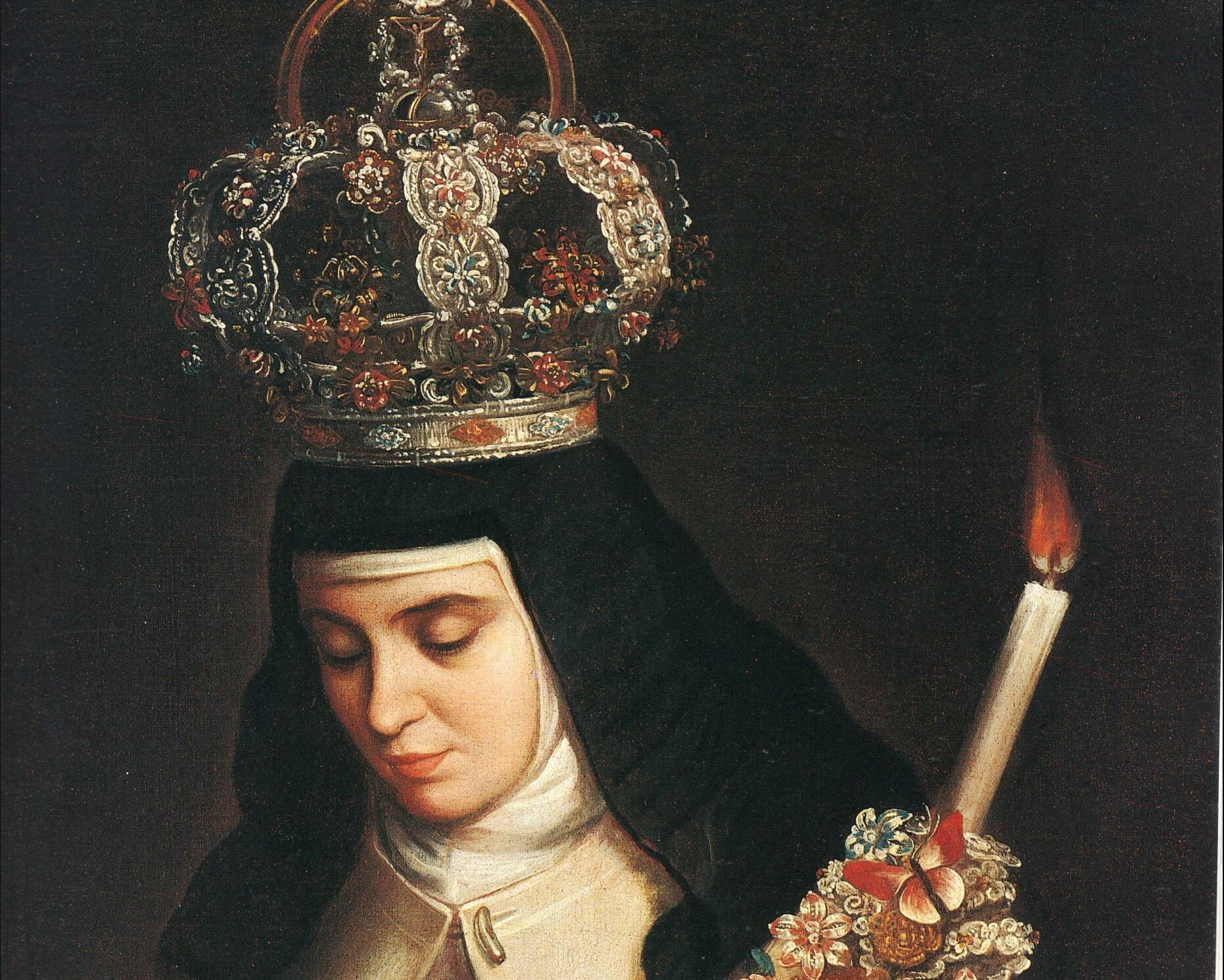 Sor María’s family commissioned Sor María Ignacia de la Sangre de Cristo as a memento of their soon-to-be cloistered daughter. It also represents social class and financial status when portraying the nun’s ceremonial crown, embroidered robe, and jewelry. In this nun’s portrait, Sor María is central to the composition. Her candle, adorned with a cross, and ceremonial crown are inlaid with gorgeous jewels, and she wears a ring on her left hand. It is worth noting that Sor María’s veil is also decorated with pearls to fit the side of her face. In New Spain, lower-class people were prohibited from wearing certain jewelry. Hence, one can infer that the jewelry implies that Sor María was born into a wealthy and elite family.

Furthermore, Sor María is dressed in a long, dark blue cloak with exquisite embroidery and lace. The dark blue cloak contrasts sharply with the silver lace and embroidery. The high cost of indigo dyeing made it a luxurious color at that time, thus the plentiful blue demonstrates the background of the nun’s family. Not all traditional profession portraits of nuns are pictured with such gorgeous textiles. When observing another profession portrait, Sister María Clara Josefa by José del Castillo, it is evident that María Clara Josefa’s cloak is quite plain and simple. It has neither rich blue accents nor are there any exquisite embroidery or lace on her garments.

The jewelry and attire in Sor María Ignacia de la Sangre de Cristo reveals that she came from a wealthy family of high status. It also shows a significant genre – portrait painting of local elites, which began in the late 17th century. Moreover, the indigo cloak not only tells us about the nun’s social class and her family’s background, it also indicates Sor María’s moral virtues and piety related to religion. The Council of Ephesus recognized people’s worship of the Virgin Mary and her icon’s use in 431 CE. Subsequently, the image of the Virgin Mary became very popular.

The Virgin Mary in portraits usually wears a blue robe to symbolize heaven, purity, virtue, and truth. Botticelli’s Madonna of the Book and Bellini’s Madonna and Child are two typical examples of this blue robe. Blue is thus a sacred color as well as signifying sumptuousness. José de Alcíbar demonstrates a sense of religious reverence by stringing the nun and the Virgin Mary together. He also illustrates the family’s intimacy with the Catholic Church through this sacred blue cloak.

Not all young ladies who entered the convent were pleased to do so in New Spain, some preferred to get married. For that reason, if an older daughter refused to become a nun, her younger sister would then be obligated to. A large number of girls were essentially forced to enter the convent against their will as their families would be publicly shamed if all daughters stayed at home living secular lives. Gazing at Sor María’s face, she looks tranquil and appears to be somewhat melancholy and doleful. Sumptuous jewels and exquisite attire surround her. She has become the glory of the whole family. What was she meditating on when she swore to God that she had died symbolically in the outside world? Only a moment after she took the oath would her soul forever find eternity in a new pious and pure world.

In today’s society however, young ladies forced into the convent for their family honor are rare. Also portrait photography has gradually replaced oil portraiture when recording a nun’s profession. Portraits of nuns have thus become a unique artistic heritage of New Spain. Nuns sighed quietly across the centuries. When a nun came to the end of her live, would she recall the instant that heralds eternity? The answer is no longer known.